“It is not the absence of sin but the grieving over it which distinguishes the child of God from empty professors”
― A.W. Pink
topics: repentance , sin
40 likes
“No verse of Scripture yields its meaning to lazy people.”
― A.W. Pink
33 likes
“Instead of a river, God often gives us a brook, which may be running today and dried up tomorrow. Why? To teach us not to rest in our blessings, but in the blesser Himself.”
― A.W. Pink ,

32 likes
“The god which the vast majority of professing Christians love is looked upon very much like an indulgent old man, who himself has no relish for folly, but leniently winks at the indiscretions of youth...For one sin God banished our first parents from Eden; for one sin all the posterity of Canaan fell under a curse which remains over them to this day; for one sin Moses was excluded form the promised land; Elisha’s servant smitten with leprosy; Ananias and Sapphira were cut off from the land of the living.”
― A.W. Pink
26 likes
“When we complain about the weather, we are, in reality, murmuring against God.”
― A.W. Pink
topics: complaining , sovereignty-of-god
25 likes
“Were God to show grace to all of Adam's descendants, men would at once conclude that He was righteously compelled to take them to heaven as meet compensation for allowing the human race to fall into sin. But the great God in under no obligation to any of his creatures, least of all to those who are rebels against him.”
― A.W. Pink ,

from The Attributes of God

topics: creator , god , grace , human , justice , man , sin
25 likes
“But why should we not place implicit confidence in God and rely upon His word of promise? Is anything too hard for the Lord? Has His word of promise ever failed? Then let us not entertain any unbelieving suspicions of His future care of us. Heaven and earth shall pass away, but not so His promises.”
― A.W. Pink ,

18 likes
“He foresaw my every fall, my every sin, my every backsliding; yet, nevertheless, fixed His heart upon me.”
― A.W. Pink ,

from The Attributes of God - with study questions

17 likes
“When you observe that the fire in your room is getting dull, you do not always put on more coal, but simply stir with the poker; so God often uses the black poker of adversity in order that the flames of devotion may burn more brightly.”
― A.W. Pink ,

from An Exposition of Hebrews

topics: adversity , christian , christianity , devotion , suffering
17 likes
“There is only one safeguard against error, and that is to be established in the faith; and for that, there has to be prayerful and diligent study, and a receiving with meekness the engrafted Word of God. Only then are we fortified against the attacks of those who assail us.”
― A.W. Pink ,

from The Attributes of God

topics: arthur-w-pink , attributes-of-god
16 likes
“Our Lord has many weak children in His family, many dull pupils in His school, many raw soldiers in His army, many lame sheep in His flock. Yet He bears with them all, and casts none away.”
― A.W. Pink ,

from The Gospel of John

14 likes
“Deny that the Bible is, without any qualifications, the very Word of God, and you are left without any ultimate standard of measurement and without any supreme authority. Grant that the Bible is a Divine revelation and communication of God's own mind and will to men, and you have a fixed starting point from which an advance can be made into the domain of truth.”
― A.W. Pink
topics: presuppositional-apologetics , presuppositionalism
11 likes
“To argue that God is “trying His best” to save all mankind, but that the majority of men will not let Him save them, is to insist that the will of the Creator is impotent, and that the will of the creature is omnipotent.”
― A.W. Pink ,

from The Sovereignty of God

10 likes
“Those who speak of man's "free will," and insist upon his inherent power to either accept or reject the Saviour, do but voice their ignorance of the real condition of Adam's fallen children.”
― A.W. Pink
topics: kindlehighlight
10 likes
“It is not the absence of sin but the grieving over it which distinguishes the child of God from empty professors.”
― A.W. Pink
10 likes
“All outward actions are worthless while our hearts be not right with God.”
― A.W. Pink
9 likes
“We must not forget that the issues of Eternity are settled in Time.”
― A.W. Pink
9 likes
“Thousands acknowledge they are sinners, who have never mourned over the fact.”
― A.W. Pink
9 likes
“The first time [Christ] came to slay sin in men. The second time He will come to slay men in sin.”
― A.W. Pink
topics: eschatology , second-coming-of-christ
9 likes
“The gospel of Satan is not a system of revolutionary principles, nor yet a program of anarchy. It does not promote strife and war, but aims at peace and unity. It seeks not to set the mother against her daughter nor the father against his son, but fosters the fraternal spirit whereby the human race is regarded as one great “brotherhood.” It does not seek to drag down the natural man, but to improve and uplift him. It advocates education and cultivation and appeals to “the best that is within us.” It aims to make this world such a comfortable and congenial habitat that Christ’s absence from it will not be felt and God will not be needed. It endeavors to occupy man so much with this world that he has no time or inclination to think of the world to come. It propagates the principles of self-sacrifice, charity and benevolence, and teaches us to live for the good of others, and to be kind to all. It appeals strongly to the carnal mind and is popular with the masses, because it ignores the solemn facts that by nature man is a fallen creature, alienated from the life of God, and dead in trespasses and sins, and that his only hope lies in being born again.”
― A.W. Pink
9 likes 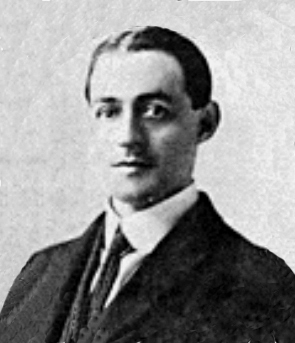 Studied at Moodly Bible Institute and pastored some churches in America. He was not very accepted in his congregations which finally made him move back to England to be involved in writing ministry full-time till his death.

He was strictly calvinist in this thinking but many of his writings also reflect balance and openness to other views of doctrine. Especially his teachings on antichrist and end-times were promoted well during his life. He wrote over 40 books and many pamphlets including he distributed titled: "Studies in the Scriptures."

Arthur Walkington Pink was a Christian evangelist and Biblical scholar known for his staunchly Calvinist and Puritan-like teachings.

Pink was born in Nottingham, England on April 1, 1886 and became a Christian in 1908, at the age of 22. Though born to Christian parents, prior to conversion he migrated into a Theosophical society (an occult gnostic group popular in England during that time), and quickly rose in prominence within their ranks. His conversion came from his father's patient admonitions from Scripture. It was the verse, Proverbs 14:12, 'there is a way which seemeth right unto a man, but the end thereof are the ways of death,' which particularly struck his heart and compelled him to renounce Theosophy and follow Jesus.

Desiring to grow in knowledge of the Bible, Pink immigrated to the United States to study at Moody Bible Institute. In 1916 he married Vera E. Russell (January 8, 1893 - July 17, 1962), who was from Kentucky. However, he left after just two months for Colorado, then California, then Britain. From 1925 to 1928 he served in Australia, including as pastor of two congregations from 1926 to 1928, when he returned to England, and to the United States the following year. He eventually pastored churches in Colorado, California, Kentucky, and South Carolina.

Converted in 1908 at the age of 22, Arthur Pink left England in 1910 to Study and Moody Bible Institue in Chicago, Illinois. He left after two months and pastored a church in Silverton, Colorado. He had short term pastorates in California, Kentuck and South Carolina.

His first major work, Divine Inspiration Of The Bible, was published in 1917, followed by The Sovereignty Of God, in 1918 which sold less than 2000 copies. He edited the magazine, Studies In The Scriptures, from 1922-1923, in which much of his published works appeared, but circulation was poor, never more than 1000 subscribers.

Pink is famous for his writings, which had the most effect after his death, but his personal ministry as a pastor was largely a failure.