Knowing the enormity of the requirements of God's holiness should be the starting point for believing in any type of Christian Perfectionism. Like a wrongly placed survey marker, wrong concepts of God's perfection and holiness cause error to beget error. Holiness is an attribute of God's deity- it i... Read More

Genuine, authentic faith must be definite and free of doubt. Not simply general in character; not a mere belief in the being, goodness, and power of God, but a faith which believes that the things which "he saith, shall come to pass." As the faith is specific, so the answer likewise will be definite... Read More

According to Dr. Ron Mosley, dean of the American Institute of Holy Land Studies there were three major groups of Jewish Christians in the First Century: Nazarenes (Notzrim), Messianists, and Ebionites. In his book entitled Yeshua, A guide to the real Jesus he writes; "In examining the Jewish roots ... Read More

The Supreme Importance of the Incorruptible

"Be not ashamed therefore of the testimony of our Lord, nor of me his prisoner: but suffer hardship with the gospel according to the power of God; who saved us, and called us with a holy calling, not according to our works, but according to his own purpose and grace, which was given us in Christ Jes... Read More 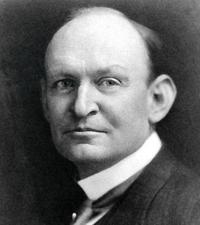 Archibald Thomas Robertson was born in 1863 and the Civil War was already taking a bad turn for the Southern cause. A.T.'s father was a country doctor and plantation owner who lost the majority of his fortune during and after the war. After suffering the devastating effects of Reconstruction, the family moved to Statesville, North Carolina to work a small farm. There on the farm, A.T. learned to make things grow. He would spend most of his life making the Word of God grow in the hearts of people around the world.

In the early 1900's, AT. was a founding member of the Baptist World Congress now known as The Baptist World Alliance. In 1914 his ministry was also broadened through a series of summer Bible conferences with D.L. Moody and F.B. Meyer, introducing Robertson to thousands of pastors and layman alike. He died of a stroke on September 24, 1934.