Atonement: The Substance of Two Letters Written to a Friend.

THE following letters are published at the request of many. Many arguments have been, and, no doubt, will yet be, offered against the sentiments. The most weighty of them I have noticed; but the most common are unworthy of notice, being nothing but retoiled refined stuff of human invention--bold uns... Read More

History of the Christian Church in the West

HISTORY OF THE CHRISTIAN CHURCH No.I Towards the close of the eighteenth century, there was an unusual death in the professors of religion, throughout the western country, both among the preachers and the people. In the commencement of the present century, the more pious became seriously alarmed at ... Read More

This term I use for want of a better. It fully expresses my understanding of the subject; and so commonly is it used to express the same idea, that it needs no definition. Philologists [164] may object to the propriety of the term; but philology must sometimes yield to general use. While I hear dail... Read More

The Kingdom of Heaven

The very term kingdom implies a king, subjects, and laws. Of the kingdom of heaven Jesus is the king. In Psalm ii. 6, the Father speaks, "I have set my king upon my holy hill of Zion." From the next verse it is plainly seen, that this king is the Son of God. This truth runs through the scriptures, e... Read More

MY SONS: Hear the advice of an old father, just about to leave you--just about to be discharged from his services in the ministry for nearly half a century. I have been among the early pioneers of the West, in laboring through difficulties unknown to you, to preach the Gospel. 1st. It is a common sa... Read More

Atonement: The Substance of Two Letters Written to a Friend

THE following letters are published at the request of many. Many arguments have been, and, no doubt, will yet be, offered against the sentiments. The most weighty of them I have noticed; but the most common are unworthy of notice, being nothing but retoiled, refined stuff of human invention--bold un... Read More 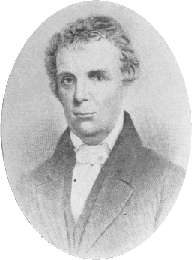 Mr. Stone's father died when he was a little child. In 1779 his mother moved with her large family of children and servants to the backwoods of Virginia, in Pittsylvania County.

In 1790 he entered Guilford Academy, in North Carolina, and determined to acquire an education or die in the attempt. There he completed the academic course. While there, in much agony of soul, he turned to the Lord, uniting with the Presbyterians. With it came the desire to preach the gospel.

The Osage Presbytery licensed him to preach in 1796. He was presented with a Bible, not the Confession of Faith. Then he started on a preaching tour over the mountains that brought him, at the close of the year, to Caneridge and Concord, Kentucky. With these churches his ministry was richly blessed. In the fall of 1798 the Presbytery of Transylvania met to ordain him to the pastorate of the two congregations. He declined to subscribe unqualifiedly to the Confession of Faith, but answered, "I do, as far as I see it consistent with the word of God."

The next year, Mr. Stone formally withdrew from the Presbyterian Church. Thus the ship of the common, catholic gospel, whose compass had been lost for fifteen centuries, was again launched upon the wide sea of human life. Mr. Stone continued an earnest student of the Scriptures; so after a time he was immersed, as were many of those associated with him.

Mr. Stone, after his removal to Lexington, Kentucky, made a trip to Meigs County, Ohio, for the purpose of immersing a Presbyterian minister named William Caldwell. While there he preached, on its invitation, to the Separate Baptist Association then assembled there.

He was a finely educated man, speaking the French language, reading the Hebrew and teaching the Greek and Latin. He was a most successful teacher, and often turned to this profession for the support of himself and family.

Mr. Stone is justly entitled to far greater credit and honor for his work in the Restoration movement than has ever been given him.