ALL FOR CHRIST (biography)

Over a hundred years ago, in February 1885, a group of young men set sail from England to become missionaries in China. They included graduates and ex-army officers and were known as the "Cambridge Seven" because they had felt called to the mission field after attending meetings at that University. ... Read More

Now Christ's command is simple, And meant to be obeyed, "Go ye and preach My Gospel In every land," He said. Christ hadn't any favourites; He lived and died for all! So all should know the Message, And hear His gracious call. So I'll go and face the music In some dark far off land, Where no one's ev... Read More

I want to be like Jesus, Who left His throne on high For hell-deserving sinners To live, and work, and die. Forsaking all His glory, His power He laid aside, His entrée—lo! a manger! His exit—crucified! We human fools rejected, And left to stand alone, The only real Victor This world has ever known.... Read More

Charles T. Studd was a servant of Christ who faithfully served His Saviour in China, India, and Africa. As Alfred Buxton in the forward to the book intitled C.T. Studd: Cricketer & Pioneer by Norman Grubb states: "C.T.'s life stands as some rugged Gibraltar--a sign to all succeeding generations that... Read More

Old Daniel was a Dreadnought! If he was here to-day, He'd make it hot for the pious lot Who don't do as they say. He didn't speak behind folks' backs, But met them face to face; He called spades spades, and dubbed knaves knaves, And always proved his case. He neither cared for place nor power, Nor f... Read More

I'm going to live for Jesus, And fling the world away, I'm going to give to Jesus My life and all to-day. I've done it, Hallelujah! And now I pray the prayer That I may follow "Jesus Only," everywhere. I'm such a great big sinner, And still a bigger fool; I must keep close to Jesus And never leave H... Read More

C.T. Studd was an outstanding County and All-England Cricketer. He was a freshman at Trinity College, Cambridge, in 1879-1880, and took a degree in law. By that time he had been challenged to a missionary career and, forsaking his cricketing fame and the family fortune, he followed Hudson Taylor to ... Read More

What could we do without the Book That God gave us to read? No more than any farmer Who hadn't any seed! No other tells us of our Lord, The God of grace and love, Who made the whole creation, This world and those above. What could we do were we without The Gospels or the Acts? No more than could a b... Read More

The Personal Testimony of C.T. Studd

I was brought up in the Church of England and was pretty religious — so most people thought. I was taken to church and baptized the right day, and after a time I was confirmed and took communion. But I did not know anything about Jesus Christ personally. I knew a little about Him, as I may know a li... Read More

Our Saviour has given commandment To such as believe, in their hearts, To publish the news of Salvation On earth, to its uttermost parts. The doors of the world lie wide open; Its lands have been duly explored; The sorrows and needs of the heathen Can only be met by the Lord. Christians were never s... Read More

Over a hundred years ago, in February 1885, a group of young men set sail from England to become missionaries in China. They included graduates and ex-army officers and were known as the "Cambridge Seven" because they had felt called to the mission field after attending meetings at that University. ... Read More

On January 13, 1877, Studd who had recently received $145,000 from an inheritance, put it all in the bank of heaven, and continued on with his work in China as a poor missionary. Before it was all over, he had also brought Christ to India, challenged students across America to Christian service, and... Read More

Charles T. Studd was a servant of Christ who faithfully served His Saviour in China, India, and Africa. As Alfred Buxton in the forward to the book intitled C.T. Studd: Cricketer & Pioneer by Norman Grubb states: "C.T.'s life stands as some rugged Gibraltar--a sign to all succeeding generations that... Read More

Two little lines I heard one day, Traveling along life'��s busy way; Bringing conviction to my heart, And from my mind would not depart; Only one life, '��twill soon be past, Only what'��s done for Christ will last. Only one life, yes only one, Soon will its fleeting hours be done; Then, in '��that ... Read More 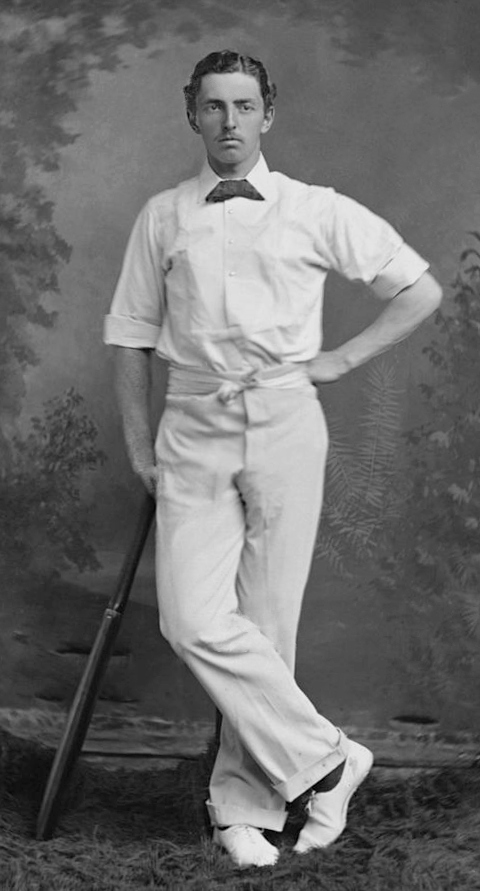 English missionary. C.T. Studd was the son of a wealthy man, Edward Studd, who was converted to Christ under the ministry of Dwight L. Moody in 1877. Young C.T. Studd became an excellent cricket player, and at the age of 19 was captain of the team at Eton. He attended Cambridge University from 1880 to 1883, and, while he was there, he also heard Dwight L. Moody preach and was converted to Christ.

Shortly afterwards, he and six other students dedicated their lives and their wealth to the Lord Jesus Christ and offered themselves to Hudson Taylor for work in China. They sailed to China in 1885. In 1888 Studd married. He continued to work for several years before bad health forced him and his wife to return to England, where they turned over all their property to the China Inland Mission.

Studd and his wife began to tour the world in order to raise funds for missions. While in southern India, on one of those tours, he found a suitable climate for him and his wife. He served there six years, after which time he returned to England to make plans to go to Africa.

In December of 1912 he left his family and was gone for two years in evangelistic work on the Dark Continent. He returned home for a short time, and then once again went back to Africa for five more years. Mrs. Studd did not join him until 1928, one year before she died.