"I THE good fight have fought," O when shall I declare!

1"I THE good fight have fought," O when shall I declare! The victory by my Saviour got I long with Paul to share. O may I triumph so, When all my warfare's past! And, dying, find my latest foe Under my feet at last. 2This blessed word be mine, Just as the port is gained "Kept by the power of grace d... Read More

A Charge to Keep I Have

1. A charge to keep I have, a God to glorify, a never-dying soul to save, and fit it for the sky. 2. To serve the present age, my calling to fulfill; O may it all my powers engage to do my Master's will! 3. Arm me with jealous care, as in thy sight to live, and oh, thy servant, Lord, prepare a stric... Read More

A CHARGE to keep I have, A God to glorify

1A CHARGE to keep I have, A God to glorify, A never-dying soul to save, And fit it for the sky; To serve the present age, My calling to fulfil: O may it all my powers engage To do my Master's will! 2Arm me with jealous care, As in thy sight to live; And O thy servant, Lord, prepare A strict account ... Read More

A NATION God delights to bless

1A NATION God delights to bless, Can all our raging foes distress, Or hurt whom they surround Hid from the general scourge we are, Nor see the bloody waste of war, Nor hear the trumpet's sound. 2O might we, Lord! the grace improve, By labouring for the rest of love, The soul-composing power; Bless u... Read More

1A THOUSAND oracles divine Their common beams unite, That sinners may with angels join To worship God aright; To praise a Trinity adored By all the hosts above, And one thrice-holy God and Lord Through endless ages love. 2Triumphant host! they never cease To laud and magnify The Triune God of holine... Read More

ABRAHAM, when severely tried, His faith by his obedience showed

1ABRAHAM, when severely tried, His faith by his obedience showed, He with the harsh command complied, And gave his Isaac back to God. 2His son the father offered np, Son of his age, his only son, Object of all his joy and hope, And less beloved than God alone. 3O for a faith like his, that we The br... Read More

ADAM descended from above, Federal Head of all mankind

1ADAM descended from above, Federal Head of all mankind, The covenant of redeeming love In thee let every sinner find. 2Its Surety, thou alone hast paid The debt we to thy Father owed; For the whole world atonement made. And sealed the pardon with thy blood 3Thee, the paternal grace divine A univers... Read More

AFFLICTED by a gracious God, The stroke I patiently sustain

1AFFLICTED by a gracious God, The stroke I patiently sustain, Grievous to feeble flesh and blood; Unable to rejoice in pain, Beneath my Father's hand I bow, And groan to feel his chastening now. 2But when he hath my patience proved, And sees me to his will resigned, His heavy hand and rod removed Sh... Read More

AFTER all that I have done, Saviour

1AFTER all that I have done, Saviour, art thou pacified Whither shall my vileness run Hide me, earth, the sinner hide! Let me sink into the dust, Full of holy shame, adore! Jesus Christ, the good, the just, Bids me go, and sin no more. 2O confirm the gracious word, Jesus, Son of God and man! Let me ... Read More

AGAIN we lift our voice, And shout our solemn joys

1AGAIN we lift our voice, And shout our solemn joys; Cause of highest raptures this, Raptures that shall never fail, See a soul escaped to bliss, Keep the Christian festival! 2Our friend is gone before To that celestial shore; He hath left his mates behind, He hath all the storms outrode; Found the ... Read More

AH Lord, with trembling I confess, A gracious soul may fall from grace

1AH Lord, with trembling I confess, A gracious soul may fall from grace; The salt may lose its seasoning power, And never, never, find it more. 2Lest that my fearful case should be, Each moment knit my soul to thee; And lead me to the mount above, Through the low vale of humble love.... Read More

AH whither should I go, Burdened, and sick, and faint

1AH whither should I go, Burdened, and sick, and faint To whom should I my troubles show, And pour out my complaint My Saviour bids me come, Ah! why do I delay He calls the weary sinner home, And yet from him I stay! 2What is it keeps me back, From which I cannot part, Which will not let my Saviour ... Read More

AH, when shall I awake From sin's soft-soothing power

1AH, when shall I awake From sin's soft-soothing power, The slumber from my spirit shake, And rise to fall no more! Awake, no more to sleep, But stand with constant care, Looking for God my soul to keep, And watching unto prayer! 2O could I always pray And never, never faint, But simply to my God di... Read More

ALL glory to God in the sky, And peace upon earth be restored!

1ALL glory to God in the sky, And peace upon earth be restored! O Jesus, exalted on high, Appear our omnipotent Lord! Who, meanly in Bethlehem born, Didst stoop to redeem a lost race, Once more to thy creatures return, And reign in thy kingdom of grace. 2When thou in our flesh didst appear, All natu... Read More

ALL glory to our gracious Lord! His love be by his church adored

1ALL glory to our gracious Lord! His love be by his church adored, His love eternally the same! His love let Aaron's sons confess, His free and everlasting grace Let all that fear the Lord proclaim. 2The Lord I now can say is mine, And, confident in strength divine, Nor man, nor fiends, nor flesh I ... Read More

ALL people that on earth do dwell, Sing to the Lord with cheerful voice

1ALL people that on earth do dwell, Sing to the Lord with cheerful voice: Him serve with fear, his praise forth tell; Come ye before him and rejoice. 2The Lord, ye know, is God indeed; Without our aid he did us make; We are his flock, he doth us feed; And for his sheep he doth us take. 3O enter then... Read More

ALL praise to our redeeming Lord

1ALL praise to our redeeming Lord, Who joins us by his grace, And bids us, each to each restored, Together seek his face. 2He bids us build each other up; And, gathered into one, To our high calling's glorious hope We hand in hand go on. 3The gift which he on one bestows, We all delight to prove; Th... Read More

ALL thanks be to God, Who scatters abroad

1ALL thanks be to God, Who scatters abroad, Throughout every place, By the least of his servants, his savour of grace! Who the victory gave, The praise let him have, For the work he hath done: All honour and glory to Jesus alone! 2Our conquering Lord Hath prospered his word, Hath made it prevail, An... Read More

ALL thanks to the Lamb

1ALL thanks to the Lamb, Who gives us to meet! His love we proclaim, His praises repeat; We own him our Jesus, Continually near To pardon and bless us, And perfect us here. 2In him we have peace, In him we have power, Preserved by his grace Throughout the dark hour, In all our temptation He keeps us... Read More 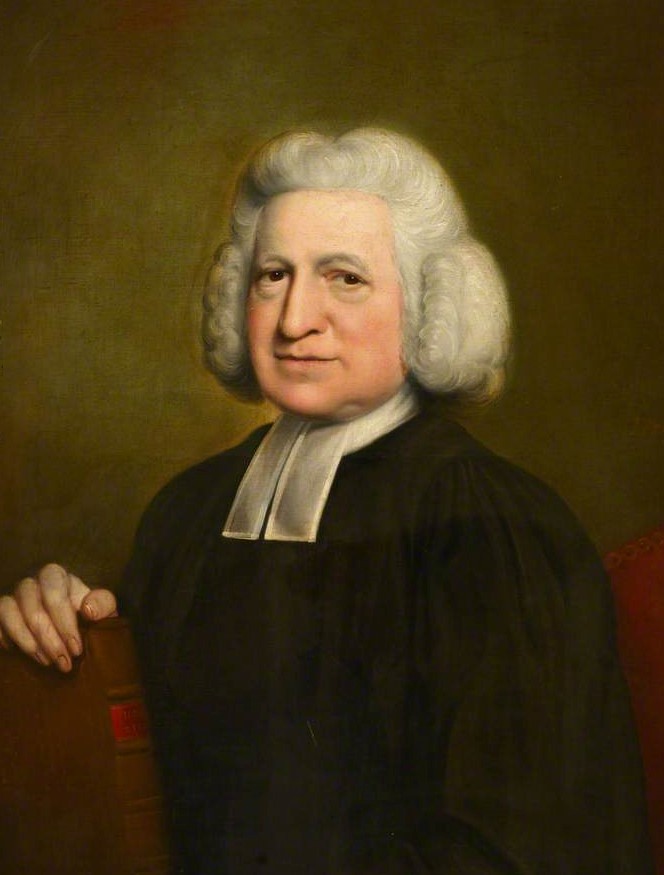 Was an English hymn writer, poet, and preacher who wrote over 5,500 hymns including And Can It Be That I Should Gain?, O for a Thousand Tongues to Sing, and Hark! the Herald Angels Sing. A leader of the Methodist movement with his brother John Wesley.

Wesley's conversion had a clear impact on his doctrine, especially the doctrine of the Holy Spirit. The change in doctrine can be seen in his sermons after 1738, but is most notable in his hymns written after 1738. From Charles published work “Hymns and Prayers to the Trinity” and in Hymn number 62 he writes “The Holy Ghost in part we know, For with us He resides, Our whole of good to Him we owe, Whom by His grace he guides, He doth our virtuous thoughts inspire, The evil he averts, And every seed of good desire, He planted in our hearts.”


Charles Wesley is best known for his prolific hymn writing, his poetry and for being one of the founding fathers of the Methodist denomination of Christianity. He wrote more than six thousand hymns, of which a handful remain in modern day worship.

John and Charles Wesley's Methodist style was to take the word of God to people, wherever they were, rather than try to get them into a church to hear it. The numbers of converts grew and were gathered into 'societies' to nurture their faith.

With their helpers they began their travelling ministry, covering thousands of miles on horseback over the years throughout England and in Scotland, Wales and Ireland, with London, Bristol, and Newcastle being the main centres of their work.

The high-intensity preaching took its toll on Charles; he suffered from nervous exhaustion and severe depression. He was 80 when he died on 29th March 1788. With his famous carol Hark the Herald Angels Sing heard everywhere from cathedrals to supermarkets, the legacy of Charles Wesley is likely to continue for years to come.

Despite their closeness, Charles and his brother John did not always agree on questions relating to their beliefs. In particular, Charles was strongly opposed to the idea of a breach with the Church of England into which they had been ordained. Charles Wesley is chiefly remembered for the many hymns he wrote. He founded Wesley Chapel in the village of Brayton, which is just south of Selby. His house, located nearby, can still be visited today.