We are witnessing a renaissance of interest in apocalyptic literature and its theology. A little over a decade ago, one of Germany's most influential New Testament scholars, Ernst Kaesemann, published an essay entitled "The Beginnings of Christian Theology".1 Kaesemann bases his argument on a form-c... Read More

How is the Bible the Word of God

"I am glad that we find in the Bible the Word of God, not the words of man." This statement was made in a prayer meeting recently attended by the author; and similar affirmations are frequently sounded from evangelical pulpits. The idea that such words intend to express is sound; but the thought, as... Read More

Introduction To The Book Of Revelation

I. Authorship. The author of the book designated himself simply as "John" (1:1; 1:4; 21:2; 22:8). He was well known by the churches of Asia, calling himself their brother, who shared with them the tribulation and the kingdom and the patient endurance (1:9). The question arises: Who was this John? It... Read More

Revelation and Tradition in Paul

The Kerygma or proclamation of the apostles and preachers of New Testament times confronts us with a difficult problem in understanding the relationship between tradition and revelation. This kerygma consisted primarily of the heralding of certain recent events in history: Jesus' death and resurrect... Read More

The Historic Hope of the Church

The question of the relationship of the Rapture to that of the Tribulation may be set in proper perspective if we first survey the history of prophetic interpretation. The hope of the Church throughout the early centuries was the second coming of Christ, not a pretribulation rapture. If the Blessed ... Read More

The History and Origins of Pretribulationism

The Return to Futurism With the dawn of the nineteenth century, there occurred a movement which brought about a return to the primitive view and which also gave rise to pretribulationism. Whitby's new postmillennial view exercised great influence in Europe in the eighteenth century and resulted in a... Read More

The Two Worlds The most difficult problem in the Johannine theology is its apparently different dualism from that of the Synoptics. The dualism in the Synoptic Gospels is primarily horizontal: a contrast between two ages -- this age and the Age to Come. The dualism of John is primarily vertical: a c... Read More 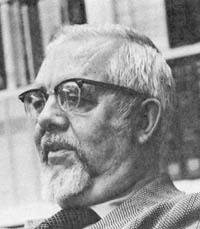 George Eldon Ladd was a Baptist minister and professor of New Testament exegesis and theology at Fuller Theological Seminary in Pasadena, California.

Ladd was ordained in 1933 and pastored in New England from 1936 to 1945. He served as an instructor at Gordon College of Theology and Missions (now Gordon-Conwell Theological Seminary), Wenham, Massachusetts from 1942–45. He was an associate professor of New Testament and Greek from 1946–50, and head of the department of New Testament from 1946–49. In 1950–52 he was an associate professor at Fuller Theological Seminary, Pasadena, Calif, becoming professor of biblical theology in 1952.

Ladd's best-known work, A Theology of the New Testament, has been used by thousands of seminary students since its publication in 1974. This work was enhanced and updated by Donald A. Hagner in 1993.