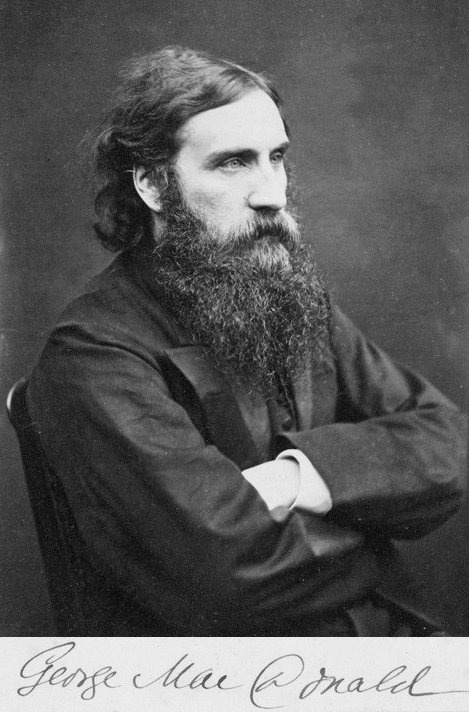 George MacDonald was a Scottish author, poet, and Christian minister.

Known particularly for his poignant fairy tales and fantasy novels, George MacDonald inspired many authors, such as W. H. Auden, J. R. R. Tolkien, C. S. Lewis, E. Nesbit and Madeleine L'Engle. G. K. Chesterton cited The Princess and the Goblin as a book that had "made a difference to my whole existence."

Even Mark Twain, who initially disliked MacDonald, became friends with him, and there is some evidence that Twain was influenced by MacDonald.

MacDonald grew up influenced by his Congregational Church, with an atmosphere of Calvinism. But MacDonald never felt comfortable with some aspects of Calvinist doctrine; indeed, legend has it that when the doctrine of predestination was first explained to him, he burst into tears (although assured that he was one of the elect). Later novels, such as Robert Falconer and Lilith, show a distaste for the idea that God's electing love is limited to some and denied to others.

‘—the spirit of adoption, whereby we cry, Abba, Father.’—Romans viii. 15. The hardest, gladdest thing in the world is, to cry Father! from a full heart. I would help whom I may to call thus upon the Father. There are things in all forms of the systematic teaching of Christianity to check this outgoi... Read More
George MacDonald

e Heart with the Treasure

Lay not up for yourselves treasures upon earth, where moth and rust doth corrupt, and where thieves break through and steal. But lay up for yourselves treasures in heaven, where neither moth nor rust doth corrupt, and where thieves do not break through nor steal. For where your treasure is, there wi... Read More
George MacDonald

The Truth shall make you free. . . . Whosoever committeth sin, is the servant of sin. And the servant abideth not in the house for ever: but the Son abideth ever. If the Son therefore shall make you free, ye shall be free indeed.—John viii. 32, 34-36. As this passage stands, I have not been able to ... Read More
George MacDonald

It Shall Not Be Forgiven

And whosoever shall speak a word against the Son of man, it shall be forgiven him: but unto him that blasphemeth against the Holy Ghost, it shall not be forgiven.—Luke xi. 18. Whatever belonging to the region of thought and feeling is uttered in words, is of necessity uttered imperfectly. For though... Read More
George MacDonald

Also unto thee, O Lord, belongeth mercy; for thou renderest to every man according to his work.—Psalm lxii. 12. Some of the translators make it kindness and goodness; but I presume there is no real difference among them as to the character of the word which here, in the English Bible, is translated ... Read More
George MacDonald

Art thou a king then? Jesus answered, Thou sayest that I am a king! To this end was I born, and for this cause came I into the world, that I should bear witness unto the truth: every one that is of the truth heareth my voice.—John xviii. 37. Pilate asks Jesus if he is a king. The question is called ... Read More
George MacDonald

Kiss of the Spirit

"While one is yet only in love, the real person lies covered with the rose leaves of a thousand sleepy-eyed dreams, and through them come to the dreamer but the barest hints of the real person. A thousand fancies fly out, approach and cross, but never meet. The man and the woman are pleased, not wit... Read More
George MacDonald

This then is the message which we have heard of him, and declare unto you, that God is light, and in him is no darkness at all.—1 John i. 5. And this is the condemnation, that light is come into the world, and men loved darkness rather than light, because their deeds were evil.—John iii. 19. We call... Read More
George MacDonald

Ye have heard that it hath been said, Thou shalt love thy neighbour, and hate thine enemy; but I say unto you, Love your enemies, bless them that curse you, do good to them that hate you, and pray for them which despitefully use you, and persecute you; that ye may be the children of your Father whic... Read More
George MacDonald

‘—and not to faint.’—St. Luke xviii. 1. ‘How should any design of the All-wise be altered in response to prayer of ours!’ How are we to believe such a thing? By reflecting that he is the All-wise, who sees before him, and will not block his path. Such objection springs from poorest idea of God in re... Read More
George MacDonald

‘And he said unto all, If any man would come after me, let him deny himself, and take up his cross daily, and follow me. For whosoever would save his life shall lose it; but whosoever shall lose his life for my sake, the same shall save it.’—St. Luke ix. 23, 24. Christ is the way out, and the way in... Read More
George MacDonald

The Cause of Spiritual Stupidity

‘How is it that ye do not understand?’—St. Mark viii. 21. After feeding the four thousand with seven loaves and a few small fishes, on the east side of the Sea of Galilee, Jesus, having crossed the lake, was met on the other side by certain Pharisees, whose attitude towards him was such that he beto... Read More
George MacDonald

The Child in the Midst

And he came to Capernaum: and, being in the house, he asked them, What was it that ye disputed among yourselves by the way? But they held their peace: for by the way they had disputed among themselves who should be the greatest. And he sat down, and called the twelve, and saith unto them, If any man... Read More
George MacDonald

Our God is a consuming fire.—Hebrews xii. 29. Nothing is inexorable but love. Love which will yield to prayer is imperfect and poor. Nor is it then the love that yields, but its alloy. For if at the voice of entreaty love conquers displeasure, it is love asserting itself, not love yielding its claim... Read More
George MacDonald

The Creation in Christ

All things were made by him, and without him was not anything made that was made. In him was life, and the life was the light of men.—John i. 3, 4. It seems to me that any lover of the gospel given to thinking, and especially one accustomed to the effort of uttering thought, can hardly have failed t... Read More
George MacDonald

The Displeasure of Jesus

When Jesus therefore saw her weeping, and the Jews also weeping which came with her, he groaned in the spirit, and was troubled.—John xi. 33. Grimm, in his lexicon to the New Testament, after giving as the equivalent of the word embrimaomai in pagan use, ‘I am moved with anger,’ ‘I roar or growl,’ ‘... Read More
George MacDonald

My God, my God, why hast thou forsaken me?”—Matthew xxvii. 46. I Do not know that I should dare to approach this, of all utterances into which human breath has ever been moulded, most awful in import, did I not feel that, containing both germ and blossom of the final devotion, it contains therefore ... Read More
Subscribe