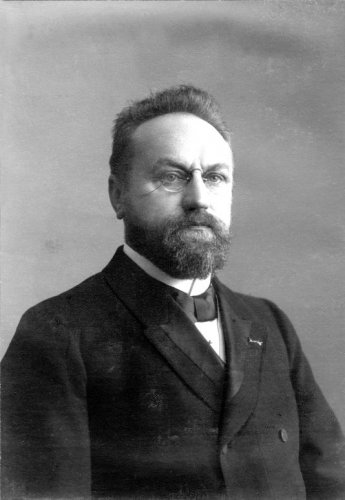 Born on December 13, 1854, in Hoogeveen, Drenthe, Holland, Herman Bavinck was the son of the Reverend Jan Bavinck, a leading figure in the secession from the State Church of the Netherlands in 1834. After theological study in Kampen, and at the University of Leiden, he graduated in 1880, and served as the minister of the congregation at Franeker, Friesland, for a year. According to his biographers, large crowds gathered to hear his outstanding exposition of the Scriptures.

In 1882, he was appointed a Professor of theology at Kampen, and taught there from 1883 until his appointment, in 1902, to the chair of systematic Theology in the Free University of Amsterdam, where he succeeded the great Abraham Kuyper, then recently appointed Prime Minister of the Netherlands. In this capacity -- an appointment he had twice before declined -- Bavinck served until his death in 1921.

The Divine and Human Nature of Christ

The testimony which, according to Scripture, Christ has given of Himself is developed and confirmed by the preaching of the apostles. The confession that a man, named Jesus, is the Christ, the Only-Begotten of the Father, is in such direct conflict with our experience and with all of our thinking, a... Read More
Herman Bavinck

Theologian of the Word

When I reflect on my spiritual pilgrimage, Reformed thinkers come to mind who became my mentors. The Dutch theologian Dr. Herman :Bavinck heads the list. I was introduced to his theology through his magisterial work, the four-volume "Gereformeerde Dogmatiek" (1906-1911) [Reformed Dogmatics], a gift ... Read More
Herman Bavinck

Unless we are mistaken in our interpretation of the signs of the times, the twentieth century, upon which we have just entered, is to witness a gigantic conflict of spirits. Faith and unbelief, says Goeethe, is the deepest theme of the history of the world. This it has been in the centuries that lie... Read More
Herman Bavinck

II. Equally important as the first inquiry into the origin is the second, which investigates the essence of things. What is the world? What is humanity and the individual? What am I? An answer to these questions is also indispensable to the unity of our thought and the peace of our heart. The new wo... Read More
Herman Bavinck

III. The third question about the end and aim of things is no less important than the other two. What is the end of the world? What is the issue of the world's history? Whither am I going? At this point the insufficiency and unsatisfactory character of the theory of development is especially evident... Read More
Herman Bavinck

1. Conception of Sin and Death: According to Genesis 2:17, God gave to man, created in His own image, the command not to eat of the tree of knowledge of good and evil, and added thereto the warning, "in the day that thou eatest thereof, thou shalt surely die." Though not exclusively, reference is ce... Read More
Herman Bavinck

Development of the Doctrine of Predestination

The Development of the Doctrine of Predestination among the Reformed: the Controversy in regard to Infra- and Supralapsarianism: (1) This controversy is rooted in the struggle between Augustine and Pelagius. According to Pelagianism both original and actual sin (unbelief) logically precede election ... Read More
Herman Bavinck

The Divine and Human Nature of Christ

The testimony which, according to Scripture, Christ has given of Himself is developed and confirmed by the preaching of the apostles. The confession that a man, named Jesus, is the Christ, the Only-Begotten of the Father, is in such direct conflict with our experience and with all of our thinking, a... Read More
Herman Bavinck

The Eternal Being reveals Himself in His triune existence even more richly and vitally than in His attributes. It is in this holy trinity that each attribute of His Being comes into its own, so to speak, gets its fullest content, and takes on its profoundest meaning. It is only when we contemplate t... Read More
Herman Bavinck

1. Meaning of Genesis 3 2. Genesis 3 in the Old and New Testaments 3. The Fall and the Theory of Evolution 4. The Character of the Fall The question concerning the origin, the age and the written record of the history of the Fall in Genesis 3 need not be discussed here. For in the first place, scien... Read More
Herman Bavinck

The Law--Gospel Distinction and Preaching

520. The first and primary means of grace is the Word of God. Lutheran and Reformed agree with each other here. Nevertheless, the latter do not discuss the Word of God under the heading of the means of grace, since in their dogmatics they have usually treated it by this time in a separate chapter [r... Read More
Herman Bavinck

The Law--Gospel Distinction and Preaching

It is therefore surely worth the effort to try and answer the following questions: What attitude is Christian ethics going to adopt towards war? Does war have a place in the Christian world-and-life view? Or must war at all times and in all places be condemned and opposed as a crime? Does war make a... Read More
Herman Bavinck

The Origin, Essence, and Purpose of Man