My beloved spoke and said to me, "Arise, my darling, my beautiful one, and come with me. See! The winter is past; the rains are over and gone. Flowers appear on the earth; the season of singing has come, the cooing of doves is heard in our land. The fig tree forms its early fruit; the blossoming vin... Read More

Genesis 2 WHAT a poem, what a picture was the first chapter! Unrivalled in magnificence. The work done, and the words which describe it, are both of God. Now we get some details of the work. I. Its completion. Thus the heavens and earth were finished, and the whole host or array of all that they con... Read More

Amid The Dazzling Confusion

The religious atmosphere of the present time is much changed from what it was in my younger days; and I may be allowed to note the difference. The theological crisis through which we are passing is a peculiar one, such as the men of fifty years ago would have thought very unlikely; and I wish to mar... Read More

"Go in and possess the land." – Deuteronomy 10:2 Israel passed through many changes in their history; but here we have its termination– the possession of the land. They were bondsmen, wanderers, outsiders, borderers; but they were not to remain such; they were to possess the land. Here their earthly... Read More

BELIEVE AND BE SAVED

It is the Holy Spirit alone that can draw us to the cross and fasten us to the Saviour. He who thinks he can do without the Spirit, has yet to learn his own sinfulness and helplessness. The gospel would be no good news to the dead in sin, if it did not tell of the love and power of the divine Spirit... Read More

You are in earnest now; but I fear you are making your earnestness your Christ, and actually using it as a reason for not trusting Christ immediately. You think your earnestness will lead on to faith, if it be but intense enough, and long enough persisted in. But there is such a thing as earnestness... Read More

“He that is washed needeth not, save to wash his feet, but is clean every whit.”—John 13:10. THIS washing of the disciples’ feet was one of the last of our Lord’s acts on earth, as the servant of his disciples, the servant of sinners. How fully did that towel, and that basin, shew that he had “taken... Read More

If Christ is not the Substitute, He is nothing to the sinner. If He did not die as the Sin-bearer, He has died in vain. Let us not be deceived on this point nor mislead by those who, when they announce Christ as the Deliverer, think they have preached the gospel. If I throw a rope to a drowning man,... Read More

Is the Christianity of our day of the lofty kind of which apostolic men have left us so bright an example? Is it not feeble, indolent, self-indulgent, second-rate? Is there in it anything of the presentation of ‘living sacrifices’ to God, which is our acceptable and reasonable service? Are we not se... Read More

Daniel Rowland of Llangeitho, Wales, stands next to his contemporary George Whitefield in might, faith, and zeal. In natural boldness and energy of character, tempered with gentleness and love, he had few equals. In fervor of spirit, in singleness of eye and heart, in compassion for souls, he is mar... Read More

"Darkness shall pursue his enemies." Nahum 1:8 "But he sweeps away his enemies in an overwhelming flood. He pursues his foes into the darkness of night." Nahum 1:8 It is of Nineveh and Assyria that this prophet utters his fearful burden. That city and its inhabitants were to bear the judgments of Je... Read More

"The former governors....had laid heavy burdens on the people, demanding a daily ration of food and wine, besides a pound of silver. Even their assistants took advantage of the people. But because of my fear of God, I did not act that way." Neh. 5:15 When Joseph was dealing with his brethren he said... Read More

Divine Jealousy For The Truth

“O Lord, are not thine eyes upon the truth?” –Jeremiah 5:3 The word “truth” in Scripture refers both to doctrine and practice. It points both to the “error” and the “lie.” It classes both together. It condemns both. False speaking, whether in reference to teaching or witness-bearing, is declared to ... Read More

Divine Jealousy For the Truth.

Divine Longings Over the Foolish.

"If only they were wise and would understand this and discern what their end will be!" – Deuteronomy 32:29 These are the words, not of anger, but of love, of disappointed affection, of a sorrowful friend, of a tender-hearted father, of an earnest, gracious, patient God. In these words God yearned ov... Read More

Divine Love and Human Rejection of It.

"I hearkened and heard, but they spoke not aright: no man repented him of his wickedness, saying, What have I done? every one turned to his course, as the horse rushes into the battle. Yes, the stork in the heaven knows her appointed times; and the turtle, and the crane, and the swallow, observe the... Read More

"And when Saul inquired of the Lord, the Lord answered him not, neither by dreams, nor by Urim, nor by prophets. Then said Saul unto his servants, Seek me a woman that hath a familiar spirit, that I may go to her, and inquire of her. And his servants said to him, Behold, there is a woman that hath a... Read More

Every Christian a Teacher. 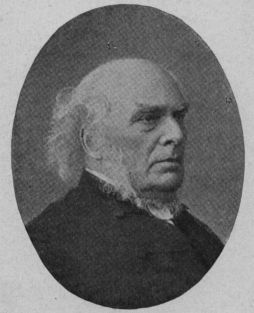 Bonar has been called “the prince of Scot­tish hymn write­rs.” After grad­u­at­ing from the Un­i­ver­si­ty of Ed­in­burgh, he was or­dained in 1838, and be­came pas­tor of the North Par­ish, Kelso. He joined the Free Church of Scot­land af­ter the “Dis­rupt­ion” of 1843, and for a while edit­ed the church’s The Border Watch. Bonar re­mained in Kel­so for 28 years, af­ter which he moved to the Chal­mers Me­mor­i­al church in Edin­burgh, where he served the rest of his life. Bonar wrote more than 600 hymns.

He was a voluminous and highly popular author. He also served as the editor for "The Quarterly journal of Prophecy" from 1848 to 1873 and for the "Christian Treasury" from 1859 to 1879. In addition to many books and tracts wrote a number of hymns, many of which, e.g., "I heard the voice of Jesus say" and "Blessing and Honour and Glory and Power," became known all over the English-speaking world. A selection of these was published as Hymns of Faith and Hope (3 series). His last volume of poetry was My Old Letters. Bonar was also author of several biographies of ministers he had known, including "The Life of the Rev. John Milne of Perth" in 1869, - and in 1884 "The Life and Works of the Rev. G. T. Dodds", who had been married to Bonar's daughter and who had died in 1882 while serving as a missionary in France.


Horatius Bonar comes from a long line of ministers who have served a total of 364 years in the Church of Scotland.

He entered the Ministry of the Church of Scotland. At first he was put in charge of mission work at St. John's parish in Leith and settled at Kelso. He joined the Free Church at the time of the Disruption of 1843, and in 1867 was moved to Edinburgh to take over the Chalmers Memorial Church (named after his teacher at college, Dr. Thomas Chalmers). In 1883, he was elected Moderator of the General Assembly of the Church of Scotland.

He was a voluminous and highly popular author. He also served as the editor for "The Quarterly journal of Prophecy" from 1848 to 1873 and for the "Christian Treasury" from 1859 to 1879. In addition to many books and tracts wrote a number of hymns, many of which, e.g., "I heard the voice of Jesus say" and "Blessing and Honor and Glory and Power," became known all over the English-speaking world.

Horatius Bonar, had a passionate heart for revival and was a friend and supporter of several revivalists, He was brother to the more well-known Andrew Bonar, and with him defended D. L. Moody's evangelistic ministry in Scotland. He authored a couple of excellent revival works, one including over a hundred biographical sketches and the other an addendum to Rev. John Gillies' 'Historical Collections...' bringing it up to date.

He was a powerful soul-winner and is well qualified to pen this brief, but illuminating study of the character of true revivalists.

Horatius was in fact one of eleven children, and of these an older brother, John James, and a younger, Andrew, also became ministers and were all closely involved, together with Thomas Chalmers, William C. Burns and Robert Murray M'Cheyne, in the important spiritual movements which affected many places in Scotland in the 1830s and 1840s.

In the controversy known as the "Great Disruption," Horatius stood firmly with the evangelical ministers and elders who left the Church of Scotland's General Assembly in May 1843 and formed the new Free Church of Scotland. By this time he had started to write hymns, some of which appeared in a collection he published in 1845, but typically, his compositions were not named. His gifts for expressing theological truths in fluent verse form are evident in all his best-known hymns, but in addition he was also blessed with a deep understanding of doctrinal principles.

Examples of the hymns he composed on the fundamental doctrines include, "Glory be to God the Father".....on the Trinity. "0 Love of God, how strong and true".....on Redemption. "Light of the world," - "Rejoice and be glad" - "Done is the work" on the Person and Work of Christ. "Come Lord and tarry not," on His Second Coming, while the hymn "Blessed be God, our God!" conveys a sweeping survey of Justification and Sanctification.

In all this activity, his pastoral work and preaching were never neglected and after almost twenty years labouring in the Scottish Borders at Kelso, Bonar moved back to Edinburgh in 1866 to be minister at the Chalmers Memorial Chapel (now renamed St. Catherine's Argyle Church). He continued his ministry for a further twenty years helping to arrange D.L. Moody's meetings in Edinburgh in 1873 and being appointed moderator of the Free Church ten years later. His health declined by 1887, but he was approaching the age of eighty when he preached in his church for the last time, and he died on 31 May 1889.