"And at midnight Paul and Silas prayed, and sang praises unto God" (Acts 16:25). What can turn the statutes into songs, take the sting out of the commandments, make the will of God a delight? When it is all transfigured by the glory of love. Love inspires obedience to law, and makes it easy. If we s... Read More

"If thou hast run with the footmen, and they have wearied thee, then how canst thou contend with horses? and if in the land of peace, wherein thou trustedst, they wearied thee, then how wilt thou do in the swelling of Jordan?" (Jer. 12:5). Does it seem an unfeeling answer? It was the answer Jeremiah... Read More

Refusal of the Small

"By faith Moses...refused..." (Heb. 11:24). Faith is the refusal of the small, for the sake of the large. Faith will make no decision, take no step, merely from worldly motives; for it sees past the immediate good to a richer, grander good. Worldly-wisdom is not wisdom; it is folly, the blind graspi... Read More

"Thy statutes have been my songs in the house of my pilgrimage" (Ps. 119:54). Statutes need to be turned into songs before their work can be completed. The note is struck in the very first Psalm, which speaks of the blessedness of loving the Law and the curse of hating it. The Psalter is the blossom... Read More

The Thrill of the Moment

"Wisdom is before him that hath understanding; but the eyes of a fool are in the ends of the earth" (Prov. 17:24). We all know something of the attraction of distance, the romance of the unknown; and we are inclined to minimise present opportunities by dreaming about some larger sphere where we woul... Read More

"He that is not against us is for us" (Mark 9:40). When we think of the tolerance of God with all of us, His patience, His longsuffering with our slowness of heart, His wide, rich mercy, His free gospel of grace, how miserable are the petty barriers and limits which we set up, how sinful is our arro... Read More 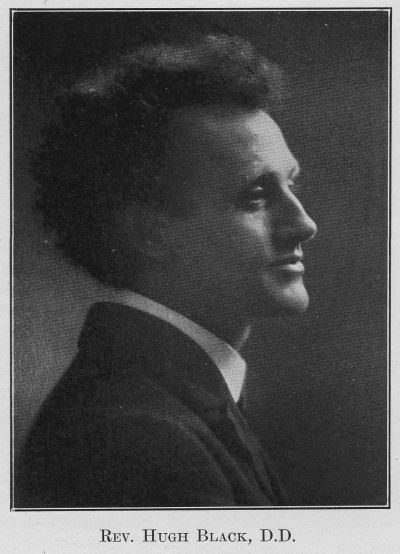 Hugh Black was a Scottish-American theologian and author.

Black was born on March 26, 1868 in Rothesay, Scotland. He received a Master of Arts degree from Glasgow University in 1887, and studied divinity at Free Church College in Glasgow from 1887 until 1891. Black was ordained in 1891 and became associate pastor at St. George's Free Presbyterian Church in Edinburgh in 1896, where he worked with Alexander Whyte.

Black emigrated to the United States in 1906 to accept the position of chair of Practical Theology at Union Theological Seminary in New York City. He received honorary Doctor of Divinity degrees from Yale University in 1908 and from Princeton University and Glasgow University in 1911, and later accepted a position of pastor of the First Congregational Church in Montclair, New Jersey. Black retired from Union Theological Seminary in 1938.