Of Heaven and Hell

OF Regeneration, OR THE New Birth SHEWING How he that earnestly seeketh Salvation, must suffer himself to be brought out of the confused and contentious Babel, by the Spirit of CHRIST, that he may be born a-new in the Spirit of CHRIST, and live to Him only. by Jacob Behmen (Jakob Boehme) 1575-1624, ... Read More

Of the Super-Sensual Life

Of True Resignation OR Dying to SELF by Jacob Behmen (Jakob Boehme) 1575-1624, The Teutonic Theosopher SHOWING How Man must DAILY die to his OWN Will in SELF; how he must bring his Desire into God, and what he should ask and desire of God. LIKEWISE How he must spring up out of the dying sinful Man, ... Read More

The Way from Darkness to True Illumination

Treasures from the Writings of Jacob Boehme

TREASURES FROM THE WRITINGS OF JACOB BOEHME Introduction to Boehme Jacob Boehme, "chosen servant of God," was born in Alt Seidenburg, Germany, in 1575. John Wesley, in his day, required all of his preachers to study the writings of Jacob Boehme; and the learned theologian, Willam Law, said of him: "... Read More

Man in "The Image of the Earthy"

"We Have Borne the Image of the Earthy" "Adam was given that which he would have, . . . the terrestrial woman, in place of the celestial virgin; for Adam's treachery toward his heavenly consort, disqualified him for her, and left him only fitted for an 'Eve'! During his sleep, the woman was made out... Read More

Man In "The Image of the Heavenly"

"O great and holy God, I pray thee, set open my inwardness to me; that I may rightly know what I am; and open in me what was shut up in Adam." . . . "God stirred himself to produce creation . . . He was desirous of having children of his own kind . . . Creation was an act of the free will of God; Go... Read More

Man in "The Restored Image"

"We Shall also Bear the Image of the Heavenly" "All the teachings of Christ have no other object than to show us how we may re-ascend to our virginal unity with him . . . There is ever a strife over man's image; the devil and hell say, 'It is mine, by right of nature; it is generated out of my root.... Read More

OR Dying to SELF by Jacob Behmen (Jakob Boehme) 1575-1624, The Teutonic Theosopher SHOWING How Man must DAILY die to his OWN Will in SELF; how he must bring his Desire into God, and what he should ask and desire of God. LIKEWISE How he must spring up out of the dying sinful Man, with a new Mind and ... Read More

THE SECOND CHAPTER Here Reason will object and say, Is it not right for a Man to attain the Light of God, and also the Light of the outward Nature and Reason, that he may be able to order his Life wisely, as the Scripture directeth? 2. Yes, it is very right; nothing can be more profitable to a Man, ... Read More

THE THIRD CHAPTER Whosoever therefore intendeth to do any good and perfect Work, wherein he hopeth eternally to rejoice, let him depart from himSELF, viz. from his OWN Desire, and enter into Resignation, into the Will of God, and work with God. And then though the earthly Desire of SELF in Flesh and... Read More

The Key to Divine Mysteries

A Short Description of the Key which opens the Divine Mysteries, and leadeth to the Knowledge of them. Whosoever is desirous to attain to Divine Vision in himself, and to speak with God in Christ, let him follow this Course, and he shall attain it. 1. LET him gather all his Thoughts and Reason toget... Read More

The Supersensual Life: Dialogue I

The Disciple said to his Master: Sir, how may I come to the Supersensual Life, so that I may see God, and hear God speak? The Master answered and said: Son, when thou canst throw thyself into That, where no Creature dwelleth, though it be but for a Moment, then thou hearest what God speaketh. Discip... Read More

Herein is described and set forth the Manner of passing the Gulf which divides betwixt the two Principles or States of Heaven and Hell: and it is particularly shewn how this Transaction is carried on in the Soul; what the Partition Wall therein is, which separates from God. What the breaking down of... Read More

DIALOGUES BETWEEN A DISCIPLE AND HIS MASTER, CONCERNING THE LIFE WHICH IS ABOVE SENSE. SHOWING How the Soul may attain to Divine HEARING and VISION - to a life above sense; and What its Childship in the Natural and Supernatural Life is; and How it passeth out of Nature into God, and out of God into ... Read More 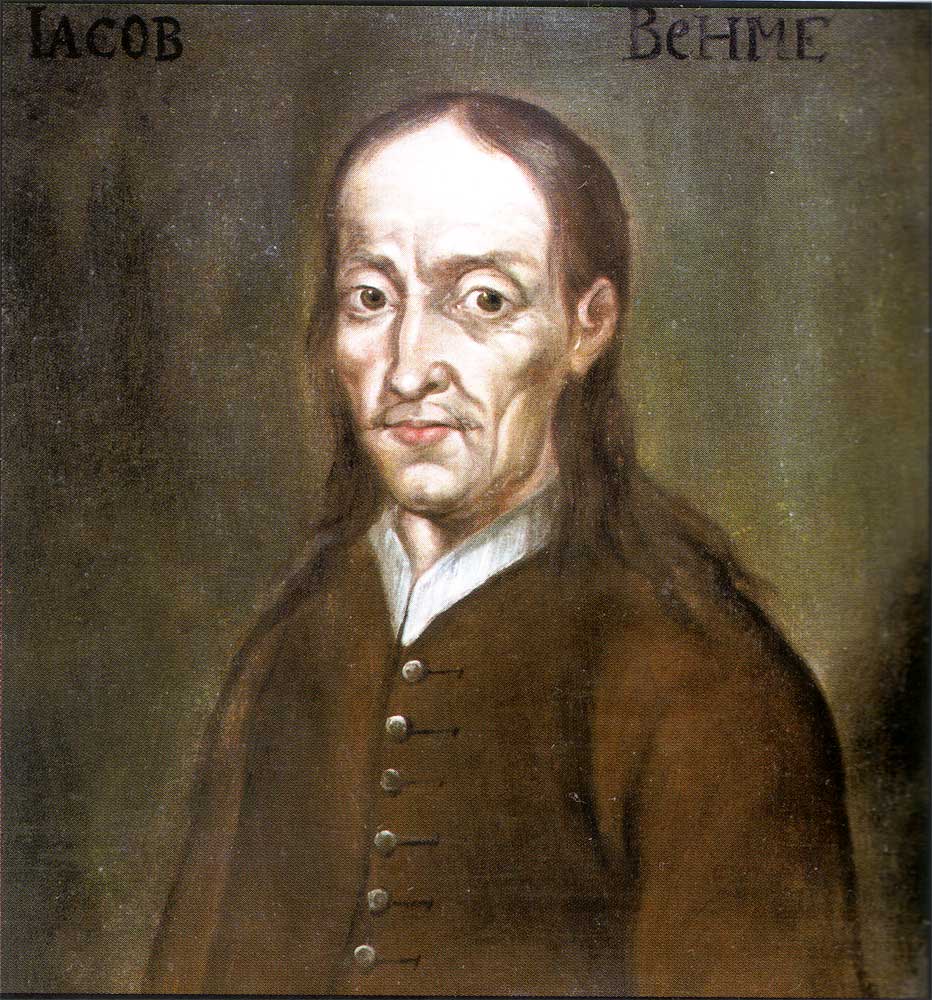 Jacob Boehme was a German Lutheran theosophical author, born in the East German town of Goerlitz in 1575. He had little in the way of an education and made his living as a shoemaker; he married and had four children. His thought drew on interests including Paracelsus, the Kabbala, alchemy and the Hermetic tradition. His first written work, Aurora, went unfinished, but drew to him a small circle of followers. Like Eckhart and others, Boehme's thought drew fire from the church authorities, who silenced Boehme for five years before he continued writing in secrecy. He again raised the cockles of church authorities, and he was banished from his home. He died soon thereafter, in 1624, after returning home from Dresden.

His last words spoken, as he was surrounded by his family, were reported to be, "Now I go hence into Paradise." His thought has since influenced major figures in philosophy, especially German Romantics such as Hegel, Baader, and Schelling. Indirectly, his influence can be traced to the work of Schopenhauer, Nietzsche, Hartmann, Bergson, and Heidegger. Further, Paul Tillich and Martin Buber drew heavily from his work -- as did the psychologist, Carl Jung, who made numerous references to Boehme in his writings.