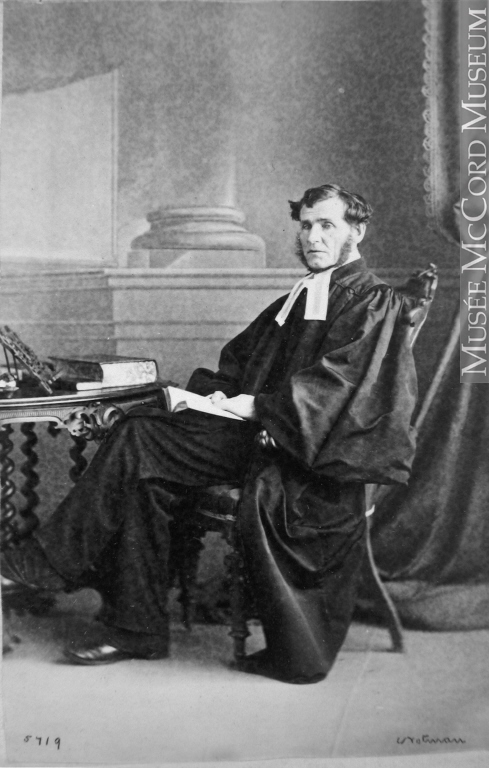 James Caughey was an Irish-born emigrant to the United States who was converted in the times of revival in 1830-31 and soon after ordained to the Methodist ministry. He experienced powerful revivals in Canada but it was his revival labours in Great Britain during the 1840's, for which he is most well known.

His early ministry fitted him for the work that was yet to come. Ordained as an elder in the Methodist Episcopal Church in 1836 he was groomed in revival practices and camp meetings.

From 1841-1847 he was led to minister in England, mainly among the midlands and north among the Methodists. During this time he earned the title 'King of Revivalist Preachers.' It was during this time, when preaching at Nottingham, that William Booth was converted under Caughey's preaching.

He claimed over 20,000 converts during this time, nevertheless he found himself out of favour with the 'High Church' party within Methodism who frowned upon his conversion contrivances and 'mushroom converts.'

On his return to America his fame had gone before him, mainly through his 'Letters' describing the success of his labours in England. This resulted in innumerable invitations to preach the north-eastern United States as well as in Canada.

He returned to England for a further two years, in 1857, again reaping a great harvest of souls. There were two further visits in 1860 and in the mid-60's.

Should We Not Weep?

If Jesus wept over Jerusalem, when He beheld a cloud of wrath gathering over it - why, Oh, why, should not we weep? I repeat it, why should not we weep to behold the mouths of the grave and of hell preparing to open and to engulf so many. Instead of repressing our tears, should we not rather say wit... Read More
James Caughey

A Call to Decision

How long halt ye between two opinions? -- 1 Kings 18:2. If there be a God who is almighty, and therefore is able to save or destroy; who, by one volition of his will can raise you up to heaven or sink you down to the depths of hell; who is infinite in wisdom and therefore intimately acquainted with ... Read More
James Caughey

An Invitation to Straitened Souls

"Even so would he have removed thee out of the strait into the broad place, where there is no straitness, and that which should be set on thy table should be full of fatness." Job 36:16. I think I have seen, perhaps, as much or more of Methodist people than the generality of this congregation. I hav... Read More
James Caughey

Should we not Weep?

If Jesus wept over Jerusalem, when He beheld a cloud of wrath gathering over it - why, Oh, why, should not we weep? I repeat it, why should not we weep to behold the mouths of the grave and of hell preparing to open and to engulf so many. Instead of repressing our tears, should we not rather say wit... Read More
James Caughey

The Fear of Death Destroyed by a Sight of Christ

And it was revealed unto him by the Holy Ghost, that he should not see death before he had seen the Lord's Christ. Luke 2:26. Bless the Lord! my soul is very happy this morning; all is serene and beautiful. All is calm and sunshine within. "Not a cloud doth arise, to darken the skies; Or hide for a ... Read More
James Caughey

The Fear of Unconverted Men in the Hour of Death

Forasmuch, then, as the children are partakers of flesh and blood he also himself likewise took part of the same; that through death he might destroy him that had the power of death, that is, the devil. Hebrews 2:14. Many persons in this congregation will remember that I preached from this text last... Read More
James Caughey

The Fullness Dwelling in Jesus Christ

"For it pleased the Father that in him should all fulness dwell." Colossians 1:15 This is the last sermon I expect to preach in England for the present. Where I shall preach again, before I return to England, I cannot tell. My heart says, "Captain of Israel's host, and Guide Of all who seek the land... Read More
James Caughey

The Omnipotence of Faith

Therefore, I say unto you what things soever ye desire when ye pray, believe that ye receive them, and ye shall have them.-- Mark 11:24. The congregation will recollect that these words were spoken by the Saviour as he was passing from the Mount of Olives to Jerusalem. By the wayside he saw a fig tr... Read More
James Caughey

Rejoice evermore, pray without ceasing, in everything give thanks: for this is the will of God in Christ Jesus concerning you:--I Thess. 5:16, 17, 18. Now, that is a religion worth having. It is the sum and substance of all true religion. It is the religion of the Bible, the religion of Heaven. I ag... Read More
James Caughey

The Sting of Death

Therefore, leaving the principles of the doctrine of Christ, let us go on to perfection, not laying again the foundation of repentance from sin and dead works. Heb. 6:1. The sting of death is sin. I Cor. 15:56. A slight acquaintance with a man will convince us of. the truth of two propositions. Firs... Read More
James Caughey

The Striving of the Spirit

And the Lord said, My Spirit shall nut always strive with man. Gen. 6:3. This is a declaration of God concerning the antediluvian world. He was about to destroy them, but could not let fall one drop of water, one flash of lightning, one spark of fire. He could neither drown nor damn a man of them ti... Read More
Subscribe