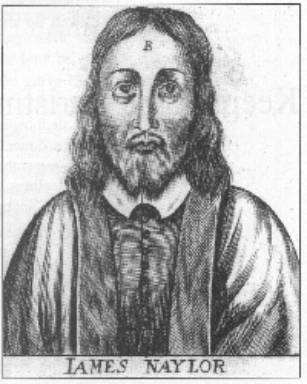 James Nayler (or Naylor) was an English Quaker leader. He is among the members of the Valiant Sixty, a group of early Quaker preachers and missionaries. At the peak of his career, he preached against enclosure and the slave trade.

After experiencing what he described as the voice of God calling him from work in his fields, Nayler gave up his possessions and began seeking a spiritual direction, which he found in Quakerism after meeting George Fox in 1652. Nayler became the most prominent of the traveling Quaker evangelists known as the "Valiant Sixty"; he attracted many converts and was considered a skilled theological debater. By all accounts an extremely charismatic man with a somewhat Christ-like appearance, he also attracted a loyal personal following, which some other Quakers regarded with suspicion.

On several occasions, Fox expressed concern that the ministry of Nayler and his associate Martha Simmonds was becoming over-enthusiastic and erratic. Though the substance of the disagreements is unclear, by 1656 Fox and Nayler were hardly on speaking terms. On 23 September 1656, Fox visited Nayler in his prison at Exeter; when the prisoner refused to kiss his hand, Fox pushed his foot toward him, "It is my foot." It was clearly not a gesture that looked toward reconciliation, Fox never apologized, and the differences remained.

Foot yet in the Snare

FOOT yet in the SNARE: Though the Beast hath healed his wound, and now pretends liberty, but is fallen into the trap of the Priests, receiving their testimony to beare it up, who are in the pit themselves, thereby giving them occasion to insult against the Truth, as the Beast and the false Prophet h... Read More
James Nayler

Glory to God Almighty Who Ruleth

Glory to God Almighty who Ruleth in the heavens, and in whose hands are all the kingdoms of the earth, who raiseth up and casteth down at his will, who hath ways to confound the exaltation of man, and to chastise his children, and to make man to know himself to be as grass before him, whose judgment... Read More
James Nayler

To The Life of God in All

James Nayler's Confession The love of that precious life of Christ Jesus in me, constrains me (as the light thereof arises) to declare to all people, and to generations to come, how the innocent, just, and holy life came to suffer in me, and be betrayed, and I to lose the light thereof, so far as to... Read More
Subscribe