" THE SON CAN DO NOTHING OF HIMSELF "

It is said of the " Beast " in Revelation 13:5 that inspired by the Dragon he would be allowed to speak " blasphemies ", and " he opened his mouth in blasphemy against God, to blaspheme His Name and His Tabernacle ... " (v. 6). So rapidly are all the characteristics foreshown as accompanying the man... Read More

God Requires Only Himself

"Be imitators of God, therefore as dearly beloved children and live a life of love, just as Christ loved us and gave himself for us as a fragrant offering and sacrifice to God". - Ephesians 5:1-2 God can do such a work in us by His Spirit, that all that He commands us to do will come about naturally... Read More

HOW "SOUL" AND "SPIRIT" ARE DIVIDED

" The word of God is living and active and sharper than any two-edged sword and piercing even to the dividing of soul and spirit, of both joints and marrow, and quick to discern the thoughts and intents of the heart ... "(Hebrews 4:12, R.V.). This remarkable passage in Hebrews 4:12 clearly sets fort... Read More

SOME LIGHT UPON THE PERILS OF THE LAST DAYS

"THE forces of psuche (soul) arrayed against the forces of pneuma (spirit)," is the expressive sentence used by a correspondent in India, to describe the conflict in the unseen realm in these solemn days. This is his description of the real issues in India at the present time, but to those able to d... Read More

(Hebrews 4: 12) THE ignorance of Christians concerning the distinction between " soul " and " spirit " is very general, and is a primary cause of the lack of full growth in the spiritual life in many devoted and earnest believers. G. H. Pember points out as the cause of this ignorance the popular ph... Read More

" And I, brethren, could not speak unto you as unto spiritual, but as unto carnal, as unto babes in Christ " (I Corinthians 3:1 R.V.). Let us repeat again at this point, that the " soul " is the seat of the self-consciousness (the personality, the will, the intellect), and stands between the spirit-... Read More

THE "MAN OF SOUL"

" The 'natural' man [' man of soul '] receiveth not the things of the Spirit of God . . . because they are spiritually discerned" (I Corinthians 2:14, lit) CHRISTIANS who have arrived at the stage of knowledge of the Cross where they cease to walk " after the flesh ", think that they are now "spirit... Read More

THE CENTRALITY OF THE CROSS

L ET us turn first to Romans 4: 25, to the declared fact of the atoning death of Christ. I was struck in looking lately at Dr. Forsyth's book on "The Cruciality of the Cross", in which he says, "a true grasp of the Atonement meets the age in its need of a centre, of an authority, or a creative force... Read More

THE CHANGED CENTRE THROUGH THE CROSS

If One died for all, then all died [in Him]" 2 Corinthians 5: 15 A S we read 2 Corinthians 5: 13- 18, we cannot fail to see how deeply, in this passage, the Cross is the very centre of the life of the Apostle. We are familiar with the fourteenth verse, which reads, "For the love of Christ constrains... Read More

THE CHANGED OUTLOOK THROUGH THE CROSS

LET us turn back a moment to 2 Corinthians 5: 14-16 (Conybeare): "The love of Christ constrains me, because I have thus judged, that if One died for all, then all died [in Him] ... I therefore, from henceforth, view no man carnally; yea, though once my view of Christ was carnal, yet now it is no lon... Read More

THE CROSS AND LIFE IN THE SPIRIT

THE CROSS AND POWER FOR SERVICE .

T HERE are so many lines of teaching on the enduement of power for service that numbers of the Lord's children are perplexed, and, in some cases hindered from receiving what they need, to equip them for effective witnessing to Christ. The trouble lies in the fact that in this, as in many other aspec... Read More

THE CROSS AND REVIVAL

If we look back at the messages of the preceding meetings we can see why Revival comes into view at this juncture. In the Revival in Wales the outstanding theme was the message of Calvary. It is only when we see the Cross as the centre, and the basis of all the working of the Holy Spirit that Reviva... Read More

THE CROSS AND THE TONGUE

"I tell you even weeping ... (of) enemies of the Cross" Philippians 3: 1 18 THE degree of our real identification with Christ in His death, and the criterion of the stage of our growth into the maturity of the life of the new creation, is in no respect more marked than in relation to the 'sins of th... Read More

THE CROSS AS A PROCLAMATION

"T HE word of the Cross is the dunamis of God," said the Apostle Paul. Dr. Mabie points out that the Greek word here is Logos, or Word-not preaching, as in the A.V. It is the same used of Christ Himself in John I: I. "In the beginning was the Logos, and the Logos was with God, and the Logos was God.... Read More

THE LIFE-SIDE OF THE CROSS

"Raised with Him."Colossians 2: 12 Dr. MABIE says in one of his books: "in the thought of' Scripture the reconciling death, and ressurection, have always been taken together. They are inseparable parts of a real Unity-TWIN PARTS OF ONE FACT". This is a very clear statement and true, but in experienc... Read More

THE PATHWAY OF THE CROSS

"Except a grain of wheat fall..." John 12: 24 NOW we come to the out-working of the Cross subjectively as a law of life out of death for fruit-bearing. We must be brought into a real fellowship with Christ in His death. There is an experimental knowledge of the Cross. The Spirit of God applies the d... Read More

THE PSYCHIC DISCOVERIES IN THE LAST DAYS

"The greatest danger," said Dr. Murray, " the individual has to dread is the inordinate activity of the soul with its powers of mind and will." This danger is intensified a thousand-fold at the present time, through the advance made by those who term themselves " Researchers " in Psychic science, ha... Read More

(pneumatikos) " He that is spiritual (pneumatikos) judgeth all things " (I Corinthians 2:15). " And the God of peace Himself sanctify you wholly: and may your spirit (pneuma) and soul (psuche) and body (soma) be preserved entire, without blame ... " (I Thessalonians 5:23, R.V.). In this passage in T... Read More 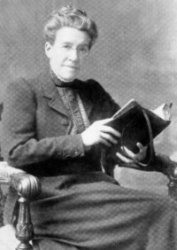 was a Welsh evangelical speaker and author of a number of Christian evangelical works. Penn-Lewis was close to Evan Roberts and there is some controversy associated with her influence over him. After the breakdown by Roberts cut the revival short, he stayed with the Penn-Lewises for a couple of years, but never fully recovered.

Penn-Lewis was influenced by the Dutch Reformed, South African writer Andrew Murray among others, and her books contain quotes from him and references to his works. Frank Buchman, the founder of the Oxford Group, credits Penn-Lewis with helping him to turn his life around from depression when he heard her speak at a Keswick Convention.[5] She also influenced Johan Oscar Smith, the founder of Brunstad Christian Church[6] and the missionary statesman Norman Grubb.

Born in 1861 in South Wales, this daughter of a mining engineer was nurtured in the "lap of Calvinistic Methodism," as she put it. Surrounded by love and a large library, she ventured into a life of learning and activity which always seemed far beyond the capability of her persistently frail body. Strong-willed and independent, she walked at the age of nine months, and by the age of four could read the Bible freely, without having been taught to read.

She married at the age of eighteen, was converted to Christ eighteen months later, and set about to learn to follow God.

At the age of thirty-one she was baptized with the Spirit, and her simple motto became, ''Keep free to follow the will of God." God gave her remarkable insight into the Scriptures, and it became obvious that He had fashioned her to be a teacher.

Her ministry took her to Sweden, Russia, Finland, India, Canada and the United States. Her life became linked to the spiritual giants of her generation- F. B. Meyer, Andrew Murray, D. L. Moody .

She founded The Overcomer, a serious journal on the pursuit of the deeper Christian life. For many years she addressed great audiences at vast conventions of Christians. Finally, after one such series of talks she arrived home obviously ill. Her strength waned rapidly and she slipped into the presence of Christ in 1927 at the age of sixty-six.

Few women in modern times have left so profound an impression on their generation, and few have so boldly and biblically stated the value of their gender. Jessie Penn-Lewis was the embodiment of Women's Liberation in its best and noblest sense.