"If Your Enemy Hunger, Feed Him"

There has no temptation taken you, but such as man can bear: but God is faithful, Who will not suffer you to be tempted above that you are able; but will with the temptation make also the way of escape, that you may be able to endure it. Thus, because he terrified them greatly, relating the ancient ... Read More

Whatsoever is sold in the shambles, eat, asking no question for conscience sake. Having said that they could not drink the cup of the Lord and the cup of the devils, and having once for all led them away from those tables, by Jewish examples, by human reasonings, by the tremendous Mysteries, by the ... Read More

But in giving you this charge, I praise you not, that you come together not for the better, but for the worse. It is necessary in considering the present charge to state also first the occasion of it. For thus again will our discourse be more intelligible. What then is this occasion? As in the case ... Read More

Now I praise you that you remember me in all things, and hold fast the traditions, even as I delivered them to you. Having completed the discourse concerning the idol-sacrifices as became him, and having rendered it most perfect in all respects, he proceeds to another thing, which also itself was a ... Read More

But let a man prove himself, and so let him eat of the bread, and drink of the cup. What mean these words, when another object is proposed to us? This is Paul's custom, as also I said before, not only to treat of those things which he had proposed to himself, but also if an argument incidental to hi... Read More

Now concerning spiritual gifts, brethren, I would not have you ignorant. You know that when you were Gentiles, you were led away unto those dumb idols, howsoever ye might be led. This whole place is very obscure: but the obscurity is produced by our ignorance of the facts referred to and by their ce... Read More

For as the body is one, and has many members, and all the members of the body, being many, are one body; so also is Christ. After soothing them from the considerations that the thing given was of free favor; that they received all from one and the self-same Spirit; that it was given to profit withal... Read More

And the eye cannot say to the hand, I have no need of you: or again the head to the feet, I have no need of you. Having checked the envy of those in lower rank, and having taken off the dejection which it was likely that they would feel from greater gifts having been vouchsafed to others, he humbles... Read More

Now you are the body of Christ and severally members thereof. For lest any should say, What is the example of the body to us? Since the body is a slave to nature but our good deeds are of choice; he applies it to our own concerns; and to signify that we ought to have the same concord of design as th... Read More

Love suffers long, and is kind; love envies not; love vaunts not itself, is not puffed up. Thus, whereas he had showed, that both faith and knowledge and prophecy and tongues and gifts and healing and a perfect life and martyrdom, if love be absent, are no great advantage; of necessity he next makes... Read More

Follow after love, yet desire earnestly spiritual gifts; but rather that you may prophesy. Thus, inasmuch as he had with exactness rehearsed unto them all the excellence of love, he exhorts them in what follows, with alacrity to lay hold of it. Wherefore also he said, Follow after: for he that is in... Read More

Brethren, be not children in mind; howbeit in malice be ye babes, but in mind be men. As might be expected, after his long argument and demonstration he adopts a more vehement style and abundance of rebuke; and mentions an example suited to the subject. For children too are wont to gape after trifle... Read More

Let your women keep silence in the churches: for it is not permitted unto them to speak; but let them be in subjection, as also says the law. Having abated the disturbance both from the tongues and from the prophesyings; and having made a law to prevent confusion, that they who speak with tongues sh... Read More

Now I make known unto you, brethren, the gospel which I preached unto you, which also ye received, wherein also ye stand; by which also you are saved: in what words I preached it unto you. Having finished the discourse of spiritual gifts, he passes to that which is of all most necessary, the subject... Read More

Whether then it be I or they, so we preach, and so ye believed. Having exalted the Apostles and abased himself, then again having exalted himself above them that he might make out an equality: (for he did effect an equality, when he showed that he had advantages over them as well as they over him,) ... Read More

Else what shall they do which are baptized for the dead? If the dead are not raised at all, why then are they baptized for the dead? He takes in hand again another topic, establishing what he said at one time from what God does , and at another from the very things which they practice. And this also... Read More

But some one will say, How are the dead raised? And with what manner of body do they come? Thou foolish one, that which you yourself sowest is not quickened, except it die. Gentle and lowly as the apostle is to a great degree every where, he here adopts a style rather pungent, because of the impiety... Read More

The first man is of the earth, earthy: the second man is the Lord from heaven. Having said that the natural was first, and the spiritual afterward, he again states another difference, speaking of the earthy and the heavenly. For the first difference was between the present life and that which is to ... Read More 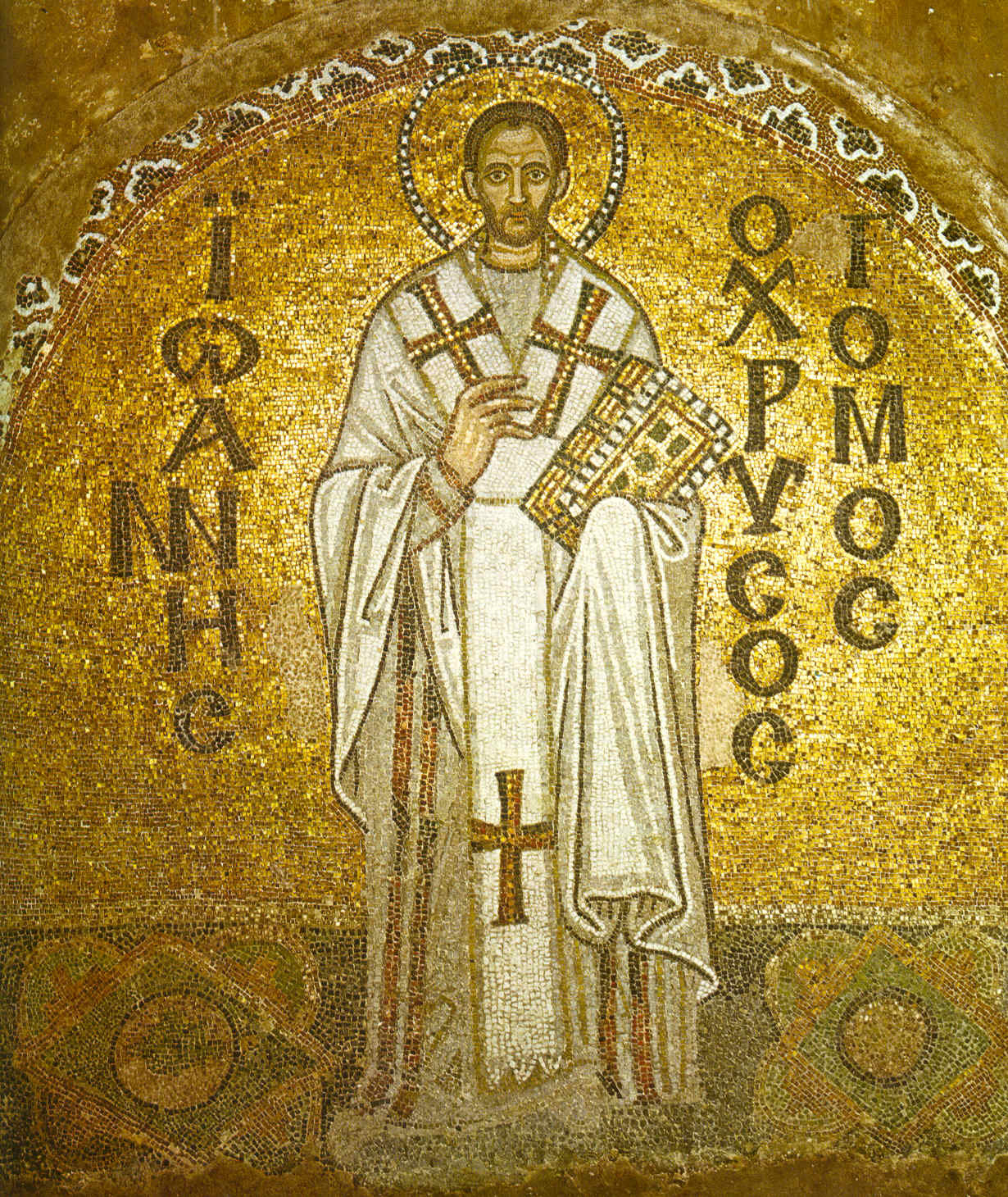 Read freely text sermons and articles by the speaker John Chrysostom in text and pdf format Archbishop of Constantinople, was an important Early Church Father. He is known for his preaching and public speaking, his denunciation of abuse of authority by both ecclesiastical and political leaders, the Divine Liturgy of St. John Chrysostom, and his ascetic sensibilities. The epithet Χρυσόστομος (Chrysostomos, anglicized as Chrysostom) means "golden-mouthed" in Greek and given for his celebrated eloquence.

The Eastern Orthodox and Byzantine Catholic churches honor him as a saint and count him among the Three Holy Hierarchs, together with Basil the Great and Gregory Nazianzus. He is recognized by the Eastern Orthodox Church and the Catholic Church as a saint and as a Doctor of the Church. Churches of the Western tradition, including the Roman Catholic Church, some Anglican provinces, and some Lutheran churches, commemorate him on 13 September. Some other Lutheran churches and Anglican provinces commemorate him on the traditional Eastern feast day of 27 January. Chrysostom's extant homiletical works are vast, including many hundreds of exegetical homilies on both the New Testament (especially the works of Saint Paul) and the Old Testament (particularly on Genesis). Among his extant exegetical works are sixty-seven homilies on Genesis, fifty-nine on the Psalms, ninety on the Gospel of Matthew, eighty-eight on the Gospel of John, and fifty-five on the Acts of the Apostles.


John Chrysostom, Archbishop of Constantinople, was an important Early Church Father. He is known for his eloquence in preaching and public speaking, and his denunciation of abuse of authority by both ecclesiastical and political leaders.

Chrysostom is known in Christianity chiefly as a preacher, theologian and liturgist, particularly in the Eastern Orthodox Church.

During a time when city clergy were subject to criticism for their high lifestyle, John was determined to reform his clergy in Constantinople. These efforts were met with resistance and limited success. He was an excellent preacher. As a theologian, he has been and continues to be very important in Eastern Christianity, and is generally considered the most prominent doctor of the Greek Church, but has been less important to Western Christianity.

His writings have survived to the present day more so than any of the other Greek Fathers. He rejected the contemporary trend for allegory, instead speaking plainly and applying Bible passages and lessons to everyday life. ... Show more
Read More
Subscribe