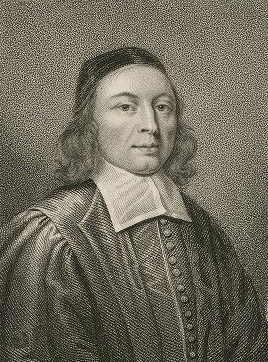 Was an English Presbyterian clergyman, puritan, and author. Flavel, the eldest son of the Rev. Richard Flavel, described as ‘a painful and eminent minister,’ who was incumbent successively of Bromsgrove, Worcestershire, Hasler and Willersey, Gloucestershire (from which last living he was ejected in 1662), was born in or about 1630 at Bromsgrove.

He was ejected from his living by the passing of the Act of Uniformity in 1662, but continued to preach and administer the sacraments privately till the Five Mile Act of 1665, when he retired to Slapton, 5 miles away. He then lived for a time in London, but returned to Dartmouth, where he labored till his death in 1691. He was married four times. He was a vigorous and voluminous writer, and not without a play of fine fancy. His principal works are his Navigation Spiritualized (1671); The Fountain of Life, in forty-two Sermons (1672); The Method of Grace (1680); Pneumatologia, a Treatise on the Soul of Man (1698); A Token for Mourners; Husbandry Spiritualized (1699).


John Flavel was an English Presbyterian clergyman. Flavel was born at Bromsgrove, Worcestershire and studied at Oxford. A Presbyterian, held livings at Diptford (in Devon) and Dartmouth. He was ejected from the latter as a result of the Great Ejection of 1662; however, he continued to preach there secretly. After the Declaration of Indulgence 1687, became a minister of a Nonconformist Church there.

He was a prolific and popular author. Among his works are The Mystery of Providence (1678), Husbandry Spiritualised (1669) and Navigation Spiritualised (1671), The Seamon's Companion (1676), titles which suggest some of his characteristics as a writer.

He died at Exeter, Devonshire, on 26 June 1691. Flavel is commemorated in the name of Flavel Road on Bromsgrove's Charford Estate.

John Flavel (or Flavell) was born in 1628 in Bromsgrove, Worcestershire. He was the son of Richard Flavel, a minister who died of the plague in 1665 while in prison for nonconformity. John Flavel was educated by his father in the ways of religion, then "plied his studies hard" as a commoner at University College, Oxford. In 1650, he was ordained by the presbytery at Salisbury. He settled in Diptford, where he honed his numerous gifts.

He married Joan Randall, a godly woman, who died while giving birth to their first child in 1655. The baby died as well. After a year of mourning, Flavel married Elizabeth Stapell and was again blessed with a close, God-fearing marriage, as well as children.

In 1656, Flavel accepted a call to be minister in the thriving seaport of Dartmouth. He earned a smaller income there, but his work was more profitable; many were converted. One of his parishioners wrote of Flavel, "I could say much, though not enough of the excellency of his preaching; of his seasonable, suitable, and spiritual matter; of his plain expositions of Scripture; his talking method, his genuine and natural deductions, his convincing arguments, his clear and powerful demonstrations, his heart-searching applications, and his comfortable supports to those that were afflicted in conscience. In short, that person must have a very soft head, or a very hard heart, or both, that could sit under his ministry unaffected."

The Life of the late Rev. Mr. John Flavel

Those of the name of Flavel derive their pedigree from one who was the third great officer that came over with William the Conqueror; but this worthy Divine was far from that weakness and vanity to boast of any thing of that nature, being of the poet's mind, who said, Et genus, et proavos, et quae n... Read More
John Flavel

Christ is to be Loved "Yes, He is altogether lovely." Song of Songs 5:16. At the ninth verse of this chapter, you have a question put forth by the daughters of Jerusalem, "What is your beloved more than another beloved?" The spouse answers, "He is the chief among ten thousand." She then recounts man... Read More
John Flavel

The Fountain Of Life

Choice excerpts from John Flavel's "The Fountain of Life" When most lame and defective in themselves Happy were it, if puzzled and perplexed Christians would turn their eyes from the defects that are in their obedience, to the fullness and completeness of Christ's obedience; and see themselves compl... Read More
John Flavel

The Method Of Grace

CHOICE EXCERPTS from John Flavel's "The Method of Grace" You have all your hearts can wish! "My God will supply all your needs according to His riches in glory in Christ Jesus." Philippians 4:19 O say with a melting heart—I have a full Christ, and He is filled for me! I have . . . His pure and perfe... Read More
John Flavel

Pithy gems from John Flavel 1628 - 1691 The soul is of more value than ten thousand worlds! ~ ~ ~ ~ Whatever we have over-loved, idolized, and leaned upon—God has from time to time broken it, and made us to see the vanity of it. So that we find the readiest course to be rid of our comforts—is to set... Read More
John Flavel

CHRIST ALTOGETHER LOVELY by John Flavel " Yes, He is altogether lovely! This is my Beloved, and this is my Friend." Song of Songs 5:16 I. Christ is to be loved At the ninth verse of this chapter, you have a question put forth by the daughters of Jerusalem, "What is your beloved more than another bel... Read More
John Flavel

The Christian View Of Death

The Christian View of Death John Flavel I shall offer several considerations calculated to help the people of God in time of sickness, to keep their hearts loose from all earthly objects, and cheerfully willing to die: 1. Death is harmless to the people of God ; its shafts leave no sting in them. Wh... Read More
John Flavel

The Way Of Salvation, In Scripture Verse

The Way of Salvation, in Scripture Verse by John Flavel Since Adam was created just and good, that is to say, holy, righteous and immortal; and dominion given him over all the creatures which God had created; and whereas he did not long remain in this state, but has through the subtlety of the Devil... Read More
John Flavel

The Harlots Face In The Looking-Glass Of Scripture

The Harlots Face in the Looking-Glass of Scripture by John Flavel Proverbs 6:32 "But a man who commits adultery lacks judgment; whoever does so destroys himself!" The next danger I shall give you warning of, is the sin of immorality; with which I fear too many of the rude and looser sort of seamen d... Read More
Subscribe