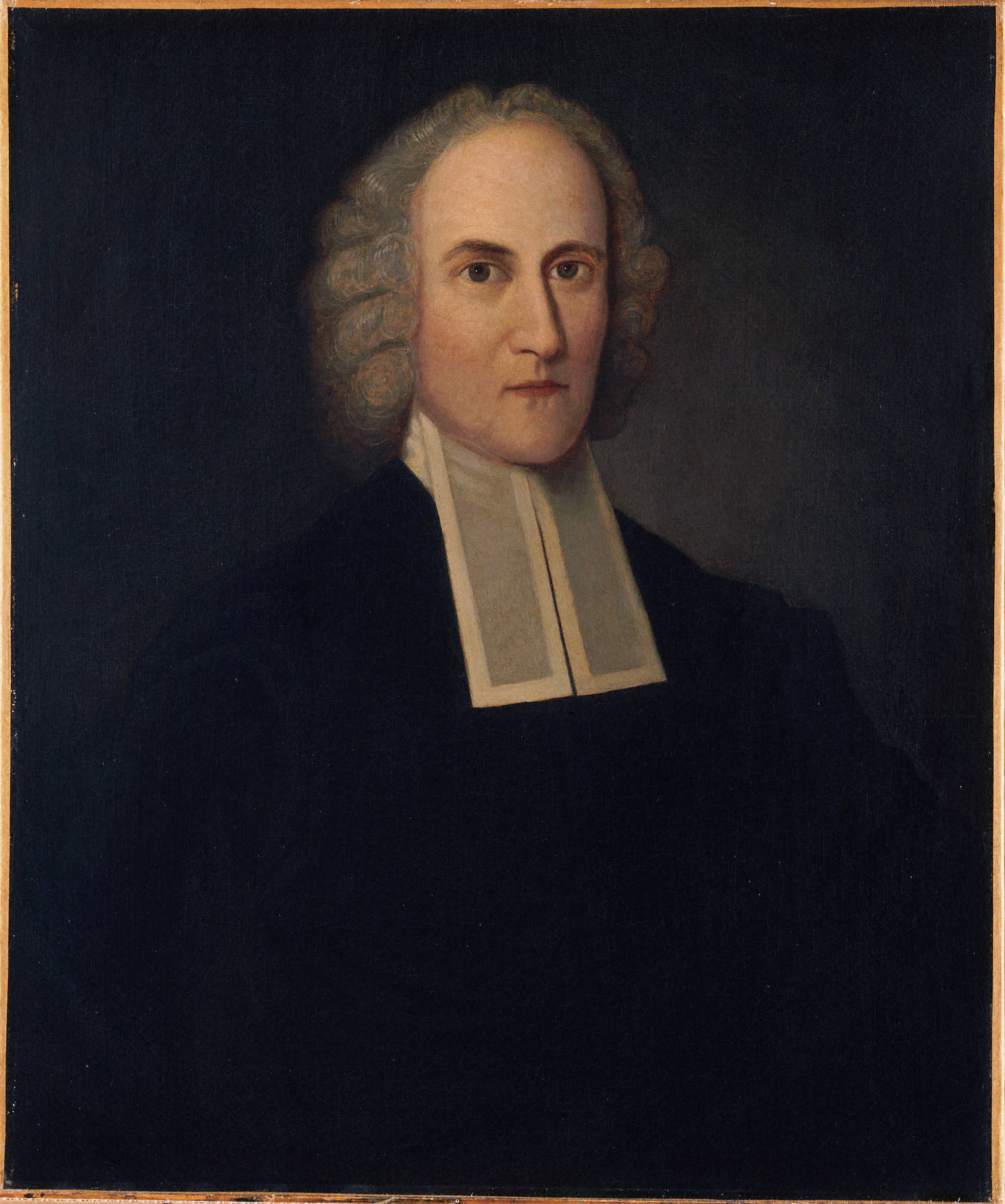 was a Christian preacher and theologian. Edwards "is widely acknowledged to be America's most important and original philosophical theologian," and one of America's greatest intellectuals. Edwards's theological work is broad in scope, but he was rooted in Reformed theology, the metaphysics of theological determinism, and the Puritan heritage. Recent studies have emphasized how thoroughly Edwards grounded his life's work on conceptions of beauty, harmony, and ethical fittingness, and how central The Enlightenment was to his mindset. Edwards played a critical role in shaping the First Great Awakening, and oversaw some of the first revivals in 1733–35 at his church in Northampton, Massachusetts.

Edwards delivered the sermon "Sinners in the Hands of an Angry God", a classic of early American literature, during another revival in 1741, following George Whitefield's tour of the Thirteen Colonies. Edwards is well known for his many books, The End For Which God Created the World, The Life of David Brainerd, which served to inspire thousands of missionaries throughout the 19th century, and Religious Affections, which many Reformed Evangelicals still read today.


Jonathan Edwards was a colonial American Congregational preacher, theologian, and missionary to Native Americans. Edwards "is widely acknowledged to be America's most important and original philosophical theologian."

His work is very broad in scope, but he is often associated with his defense of Reformed theology, the metaphysics of theological determinism, and the Puritan heritage. His famous sermon "Sinners in the Hands of an Angry God," is credited for starting the First Great Awakening. Edwards is widely known for his books Religious Affections and The Freedom of the Will. He died from a smallpox inoculation shortly after beginning the presidency at the College of New Jersey (later to be named Princeton University). Edwards is widely regarded as America's greatest theologian.

Jonathan Edwards was the only boy among eleven children. In 1720 he graduated from Yale as the valedictorian of his class. He continued at Yale working on a graduate degree in theology and was saved at the age of seventeen. Edwards was ordained in 1727 and joined his grandfather as an assistant pastor. In 1729 he became pastor of the church in Northampton, Massachusetts, which had some six hundred members. In 1735 God's blessing on his preaching resulted in a great revival with more than three hundred people saved and added to the church. Edwards is considered to be one of the men most responsible for the Great Awakening. His famous sermon, "Sinners in the Hands of an Angry God," was first preached in 1741 at Enfield, Massachusetts. In 1750 Edwards was voted out by his church after his attempt to limit church membership to those who made a profession of faith in Christ.

He spent the next seven years as a missionary to the Indians at Stockbridge, Massachusetts. In 1758 he accepted the presidency of the College of New Jersey (now called Princeton). After just weeks on the job, he died from smallpox brought on by an inoculation to protect him from the disease. Jonathan Edwards and his wife had eleven children. He spent one hour each night in conversation and instruction with his family. His daughter Jerusha was engaged to David Brainerd when he died of tuberculosis. Edwards' two most famous literary works are The Life and Diary of David Brainerd (1749) and Freedom of the Will (1754). Edwards is buried in Princeton, New Jersey.

A Divine and Supernatural Light

A Divine And Supernatural Light IMMEDIATELY IMPARTED TO THE SOUL, BY THE SPIRIT OF GOD, SHOWN TO BE BOTH A SCRIPTURAL AND RATIONAL DOCTRINE Preached in Northampton, and published at the desire of the hearers, in the year 1734. Matthew 16:17 And Jesus answered and said unto him, Blessed art thou, Sim... Read More
Jonathan Edwards

A Faithful Narrative of the Surprising Work of God

A Faithful Narrative of the Surprising Work of God is Jonathan Edwards' own account of the mighty way in which God moved among the people of Northampton, Massachusetts and other nearby communities in the early stages of what has become known as The Great Awakening. There is much to be learned from E... Read More
Jonathan Edwards

A FAREWELL SERMON Preached at the First Church in Northampton, MA after being voted out as the Pastor July 1, 1750. 2 Corinthians 1:14 As also you have acknowledged us in part, that we are your rejoicing, even as ye also are ours in the day of the Lord Jesus. Subject: Ministers and people that are u... Read More
Jonathan Edwards

An Account of the Revival of Religion in Northampton in 1740 - 1742 As Communicated in a Letter to the Rev. Thomas Prince of Boston, MA Evidently intended for publication, this letter was entitled "The State of Religion at Northampton in the County of Hampshire, About 100 Miles Westward of Boston". ... Read More
Jonathan Edwards

An Unpublished Essay on the Trinity

IT IS COMMON when speaking of the Divine happiness to say that God is infinitely happy in the enjoyment of Himself, in perfectly beholding and infinitely loving, and rejoicing in, His own essence and perfection, and accordingly it must be supposed that God perpetually and eternally has a most perfec... Read More
Jonathan Edwards

Christ Exalted Or JESUS CHRIST GLORIOUSLY EXALTED ABOVE ALL EVIL IN THE WORK OF REDEMPTION Dated August 1738. Lecture. 1 Corinthians 15:25, 26 For he must reign, till he hath put all enemies under his feet. The last enemy that shall be destroyed, is death. Subject: Our Lord Jesus Christ in the work ... Read More
Jonathan Edwards

Christ the Example of Ministers

Christ The Example Of Minsters Preached at Portsmouth, at the ordination of the Rev. Mr. Job Strong, June 28, 1749. John 13:15, 16 For I have given you an example, that he should do as I have done to you. Verily, verily, I say unto you, The servant is not greater than his lord, neither he that is se... Read More
Jonathan Edwards

Christian Cautions (Or the necessity of self-examination)

Christian Cautions Or THE NECESSITY OF SELF-EXAMINATION Psalms 139:23, 24 Search me, O God, and know my heart; try me, and know my thoughts; and see if there be any wicked way in me, and lead me in the way everlasting.. Dated September 1733. This Tract contains the substance of four posthumous disco... Read More
Jonathan Edwards

Christian Charity (Or the duty of charity to the poor, explained and enforced)

Christian Charity Or THE DUTY OF CHARITY TO THE POOR, EXPLAINED AND ENFORCED Dated January 1732/3. Deuteronomy 15:7-11 Deuteronomy 15:7-11 If there be among you a poor man of one of thy brethren within any of thy gates in thy land which the Lord thy God giveth thee, thou shalt not harden thine heart... Read More
Jonathan Edwards

Christian Knowledge Or THE IMPORTANCE AND ADVANTAGE OF A THOROUGH KNOWLEDGE OF DIVINE TRUTH Hebrews 5:12 For when for the time ye ought to be teachers, ye have need that one teach you again which be the first principles of the oracles of God; and are become such as have need of milk, and not of stro... Read More
Jonathan Edwards

Christians A Chosen Generation, A Royal Priesthood, A Holy Nation, A Peculiar People

LUKE 22:44. And being in an agony he prayed more earnestly, and his sweat was as it were great drops of blood falling down to the ground. OUR Lord Jesus Christ, in his original nature, was infinitely above all suffering, for he was "God over all, blessed for evermore;" but, when he became man, he wa... Read More
Jonathan Edwards

AFTER RECEIVING MASTER’S DEGREE AT YALE Thursday forenoon, Oct. 4, 1723. Have this day fixed and established it, that Christ Jesus has promised me faithfully, that, if I will do what is my duty, and according to the best of my prudence in the matter, that my condition in this world shall be better f... Read More
Jonathan Edwards

BACK IN EAST WINDSOR WITH TRAVELS TO NORWICH AND BOSTON Wednesday forenoon, May 1. Last night I came home, after my melancholy parting from New York. I have always, in every different state of life I have hitherto been in, thought that the troubles and difficulties of that state were greater than th... Read More
Jonathan Edwards

PREFACE TO JONATHAN EDWARDS DIARY By Sereno Dwight, 1829 HIS DIARY The diary of Mr. Edwards begins Dec. 18, 1722, when he was nineteen years of age. As far as to Jan. 15th, at night, it is written on two detached slips of paper; and the remainder in a book. [He mentions, Jan. 14th, his making the bo... Read More
Jonathan Edwards

AT NEW YORK PASTORATE Dec. 18. This day made the 35th Resolution. The reason why I, in the least, question my interest in God’s love and favor, is, — 1. Because I cannot speak so fully to my experience of that preparatory work, of which divines speak: — 2. I do not remember that I experienced regene... Read More
Jonathan Edwards

AT NORTHAMPTON PASTORATE Sept. 26, 1726. ’Tis just about three years, that I have been for the most part in a low, sunk estate and condition, miserably senseless to what I used to be about spiritual things. ’Twas three years ago, the week before commencement; just about the same time this year, I be... Read More
Jonathan Edwards

TUTOR AT YALE COLLEGE Saturday night, June 6. This week has been a very remarkable week with me, with respect to despondencies, fears, perplexities, multitudes of cares, and distraction of mind: it being the week I came hither to New Haven, in order to entrance upon the office of Tutor of the Colleg... Read More
Jonathan Edwards

Directions For Judging of Person' Experiences

"See to it That the operation be such upon the will or heart, not on the Imagination, nor on the speculative understanding or motions of the mind, though they draw great affections after 'em as the consequence. That the trouble of mind be reasonable, that the mind be troubled about those things that... Read More
Jonathan Edwards

Dishonesty (or the sin of theft and of injustice)

Dishonesty Or THE SIN OF THEFT AND OF INJUSTICE Dated July, 1740. Exodus 20:15 Thou shalt not steal. Subject: An unjust usurping of our neighbor’s property without his consent is forbidden by the eighth commandment. This is one of the ten commandments which constitute a summary of man’s duty, as rev... Read More
Subscribe