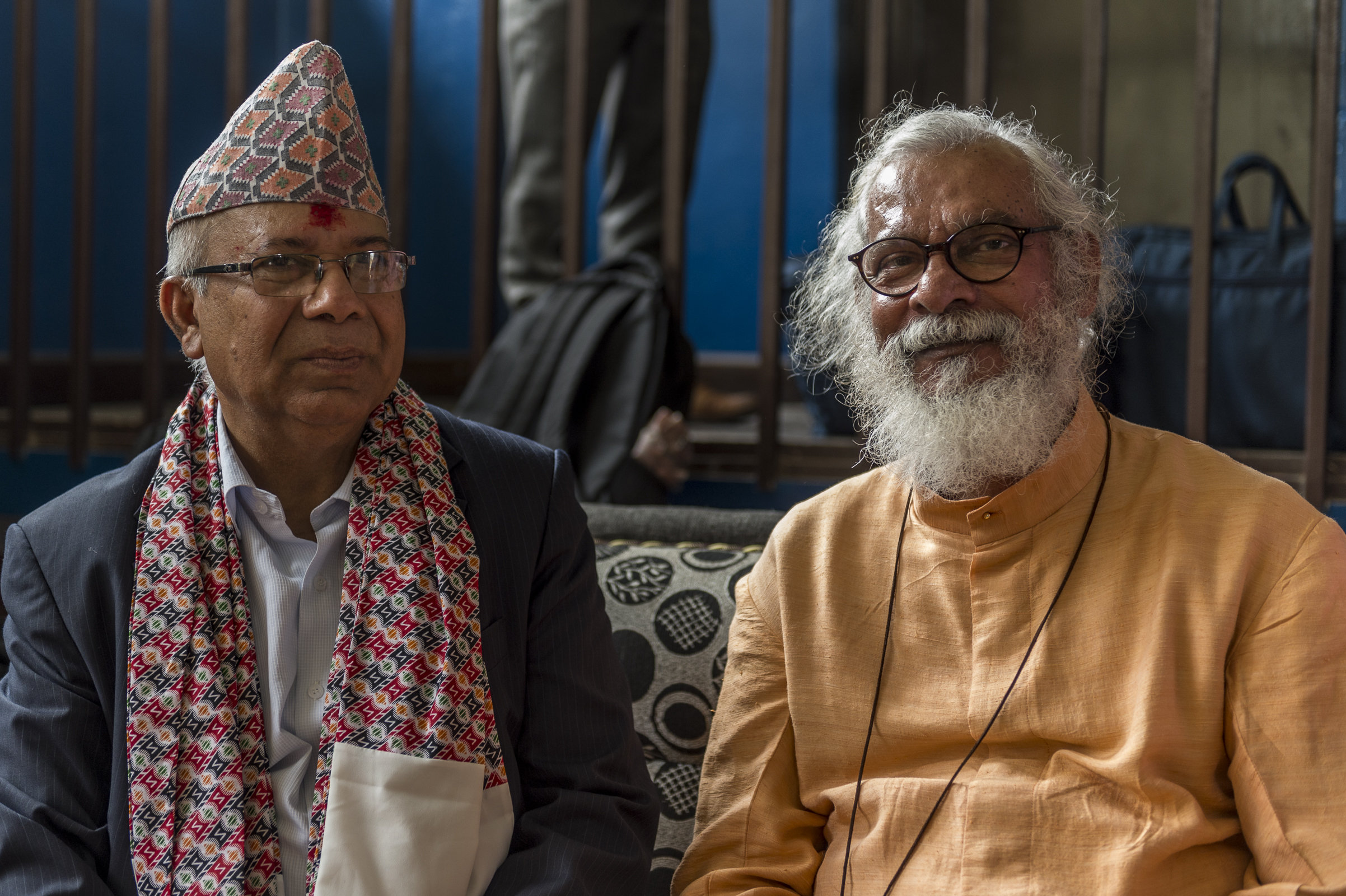 Dr. K.P. Yohannan, the Metropolitan Bishop of Believers Church, was born and brought up in Niranam, Kerala. Niranam has immense historical significance in the tradition of Saint Thomas, a disciple of Jesus Christ who planted the first church there in AD 52. K.P. Yohannan dedicated his life to God at a young age to serve the needy and downtrodden. He prayed, “Oh my Lord, let my heart break with the things that break Your heart” and his life was never the same. It’s his belief that one can only demonstrate God’s love by loving people. After over four decades of selfless service, he says, I have no regrets in praying that prayer for I know God has touched millions through what He did in and through me. It is all God’s grace.

He spent the early years of his service in North India and traveled to the remote villages sharing the love of Christ and doing charitable works. Through numerous encounters during those years, he was instilled with an increasing passion to bring hope, peace, and comfort to the needy and deprived. His sacrificial commitment, farsightedness and aptitude to perceive helped him to lead a life of unhindered devotion to serve Christ and His church. K.P. Yohannan is also the voice of Athmeeya Yathra, touching millions through his daily radio and TV broadcasts. His 250 books offer practical and spiritual guidance on hundreds of subjects.


K.P. Yohannan is the founder and president of Gospel for Asia, a mission organization involved in evangelism and church planting in the unreached regions of Asia. Currently Gospel for Asia supports thousands of church planters in the heart of the 10/40 window.

Born in a remote village of South India, K.P. Yohannan's personal journey toward spiritual reality began at the age of eight when he gave his heart to Christ. While he was still a young boy, his mother began fasting each week, praying God would call one of her six sons into full-time gospel ministry. Her prayers were answered in 1966 when 16 year-old K.P., her youngest, volunteered to serve in North India with Operation Mobilization.

From 1974 to 1979 K.P. attended Criswell Bible College in Dallas, Texas, where he earned his B.A. in Biblical Studies. He was also awarded an honorary doctor of divinity degree from Hindustan Bible College in Madras, India. During the time he attended Criswell, he pastored a local church in Dallas. However, he was unable to forget the millions still lost without Christ in his homeland of India, and knew God was calling him to reach his own people. In 1978 K.P. resigned his pastorate and he and his wife, Gisela, organized what is now Gospel for Asia.

During my seminary years in the United States, my Greek professor was Dr. McBeth, a brilliant man with great understanding and insight into the Greek language. He taught us how to study the Bible in light of the rich meaning of the original Greek. It was amazing how he would take passages from Scrip... Read More

A Gospel of Great Joy

You know one of the hardest things I have to deal with is to sit in front of a man who has done awful, stupid things in his life or ministry yet has no conviction of sin. Even if he is caught, he acts as if there is no problem and simply asks for a transfer. I am weary of it. These were the exact wo... Read More

A Life of Balance

“It is good that you grasp one thing and also not let go of the other; for the one who fears God comes forth with both of them.” Ecclesiastes 7:18, NASB One of my happiest times growing up in India was playing along the river. When the monsoon season came and brought the floods, the river near my vi... Read More

Recently, one of Gospel for Asia’s Bible colleges faced serious trouble from anti-Christian authorities in a neighboring country. A number of the people in a border region of that country had accepted Jesus through the witness of our students. The school received a letter with an order to close down... Read More

A Nation Asleep in Bondage

Religion, I discovered, is a multi-billion dollar business in the United States. Entering churches, I was astonished at the carpeting, furnishings, air-conditioning and ornamentation. Many churches have gymnasiums and fellowships that cater to a busy schedule of activities having little or nothing t... Read More

A Reason to Live

“You are trying to make us feel guilty,” the woman protested loudly, interrupting the meeting of one of my staff members who was out sharing about the lost world and the work of the native missionaries. “No,” he assured her, “that is not my intent at all, but I believe God has put us here for a reas... Read More

A few years ago, I heard the story of one missionary serving with our organization who, in a short time, had planted five churches in a difficult part of Northeast India. Curious of how this young brother did it, I called one of our senior leaders and asked him if he could tell me more about this br... Read More

A Servant Of God

Finally, after a few weeks, the witch doctors came to Jesu Das and asked him the secret of his power. “This is the first time our power did not work,” they told him. “After doing the pujas, we asked the spirits to go and kill your family. But the spirits came back and told us they could not approach... Read More

Peter risked becoming the joke of his hometown when he rowed out in broad daylight to the deep waters of Lake Gennesaret and let down his net to catch fish. Everyone watching him from the shore must have thought he’d gone mad. Even a small child could have told him that if he wanted to catch fish, h... Read More

Then, not long after his release from prison, Adoniram’s beloved wife Nancy died. Her constant life of sacrifice and service had finally taken its toll. Just a few weeks later little Maria, their third baby, was suddenly taken from this world. Judson was left utterly alone in a hostile Buddhist land... Read More

Years ago a man came to me seeking counsel. He served as a full-time minister and was very well-known for his extraordinary giftings. Within the first few minutes of our time together, he broke down weeping. I could hardly make out what he was saying because of his intense sobbing. Finally, through ... Read More

From this point onward, man fails. Yet through this, we can still see how God magnificently weaves together His amazing plan from the beginning of history. Abraham. Further into the book of Genesis, we encounter Abraham. He had faith not only to leave his homeland and set out on a God-given quest, b... Read More

All things are possible to him who believes

“All things are possible to him who believes” (Mark 9:23). I don’t understand how it works, but God said as we pray we must keep believing that He has answered our prayer. The believing comes from Him. He is the author and finisher of our faith (see Hebrews 12:2). Faith is not something we can work ... Read More

An accurate description of the lifestyle

We move to the kitchen. The appliances have already been taken out, so we turn to the cupboards. . . . The box of matches may stay, a small bag of flour, some sugar and salt. A few moldy potatoes, already in the garbage can, must be rescued, for they will provide much of tonight’s meal. We will leav... Read More

An Invitation to Every Believer

Christ is calling every believer to come apart and enjoy spiritual intimacy with Him through various aspects of prayer: adoration, confession, intercession, listening, thanksgiving, petition, praise, singing and waiting on Him. This is not an invitation open only to a few “dare-saints”—but an access... Read More

Sixty thousand football fans fill the stadium to watch the most exciting event of the year—the Super Bowl. While spectators relax in their seats, drink their favorite soft drinks and eat their popcorn, the two teams in front of them are involved in the hardest battle of their lives. Each player is g... Read More

Are We Seeing Through the Eyes of Jesus?

Things aren’t always as they appear to us at first glance. It’s true, isn’t it? Let me explain what I mean: You make a phone call to an old friend just to say hello, but he responds with harsh words and shows no interest in talking with you. By the time you hang up, you are convinced he is upset wit... Read More
Subscribe