“I want the reader to understand, that at this time I had a good experience, a pure heart, was full of the love of God, but was not qualified for God's work. I knew that I was but a worm. God would have to take a worm to thresh a mountain. Then I asked God to give me the power he gave the Galilean f... Read More

Progress Made In Preparation

I thought I would go through a course of study and prepare for the work, thinking the Lord would make my husband and people willing in some way to let me go out and work. But I could not get my mind fixed on my study. Everything seemed empty and vacant, and I was restless and uneasy. The dear Savior... Read More 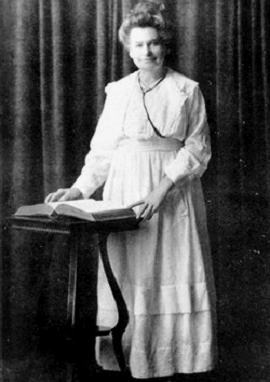 Born in 1844 in rural, central Ohio, to non Christian parents, Maria was converted to Christ at age thirteen and soon after called to evangelism. Nevertheless, she pushed the call of God aside and laboured with all her heart at caring for her family and being a homemaker. One by one, the Lord saw fit to call five of her six precious children home to Him. In regard to The Lord calling her to ministry, she would make excuses that she would be glad to if only she were a man. Then the Lord in a vision caused her to see "the bottomless pit open in all its horror and woe...It was surrounded by a great multitude of people who seemed unconscious of their danger.." After the death of her fifth child, she entered a period of illness nigh unto death. Her recovery was swift after agreeing that she would finally answer His call to reach the perishing.

She asked The Lord qualify her for the work and He answered by gloriously baptizing her in the Holy Spirit and anointing her for service. The phenomenon of trances and of people falling under the power of the Holy Ghost were known to occur during her meetings -- with the result of incredible numbers of even the most notorious sinners gloriously and lastingly converted to Christ. The Lord also gave her the gift of healing. Eventually, because of his adultery, she filed for divorce from her first husband Philo Woodworth who died in 1892. Several years later she married Samuel Etter, who ably assisted her evangelistic work. By 1912, she was involved with the Pentecostal movement and was a featured evangelist across the country. But truly The Lord gave Maria Woodworth-Etter a "Pentecostal" ministry decades before the Pentecostal movement ever began.