A Living Hope Of The Hereafter

AT THE VERY beginning of his letter the apostle Peter bursts forth into this mighty and magnificent doxology. After a very brief salutation he suddenly breaks forth in these thrilling and powerful words. In so doing the apostle was not doing anything unique. He was doing what all the early Christian... Read More

We now come to the actual petition which was offered by the Apostle for the Ephesians. It is that, having been rooted and grounded in love, they may be fully able to comprehend with all saints "what is the breadth, and the length, and the depth, and the height, and to know the love of Christ, which ... Read More

HERE WE COME TO A dramatic and almost an abrupt statement. The Apostle has been describing the kind of life which is lived by the "other Gentiles", the kind of life that these Ephesians Christians themselves used to live - the life still being lived by those of their compatriots and fellows who had ... Read More

Faith On Trial: The Problem Stated

THE GREAT VALUE of the Book of Psalms is that in it we have godly men stating their experience, and giving us an account of things that have happened to them in their spiritual life and warfare. Throughout history the Book of Psalms has, therefore, been a book of great value for God's people. Again ... Read More

He and He Alone

WWe stand here face to face with one of the sublimest and greatest statements ever made, even by this mighty Apostle of our Lord and Saviour Jesus Christ. There is a sense in which anyone who faces this verse must feel that he stands on very sacred ground. Indeed, I am ready to admit that I would al... Read More

This is the fifth woe pronounced by Isaiah on his contemporaries and it deals with something for which we have a new word today - humanism, the creed of our so-called intellectuals. The relevance of this verse in general, and in some particular respects, too, to our present condition, is something t... Read More

We must now look at the last three words in this sixth verse — "in the beloved". They constitute one of these magnificent summaries of the gospel. As we have seen, the Apostle emphasizes that we must always think of the gospel in terms of the glory of God. It is all "to the praise of the glory of hi... Read More

IN MATTHEW 6:5-8, we come to an example taken by our Lord to illustrate His teaching concerning piety or the conduct of the religious life. This is the theme which He considers in the first eighteen verses of this chapter. "Take heed," He says in general, "that ye do not your righteousness before me... Read More

Jonathan Edwards and the Crucial Importance of Revival

Purpose of the Law

In other words, the whole function of the Law is to define sin, to reveal its nature; and that is why we are without any excuse at all. The law is in our hearts; but that is not clear enough, so God made it explicit. He had defined it, He has underlined it, He has shown it plainly in the written Law... Read More

"I find I am very feeble," says Paul, "my energy seems to flag and sometimes I feel I have no life blood in me at all. But . . . because of this relationship, I find He infuses it into me. He knows my every state and condition, He knows exactly what I need. Oh, how much He gives me! He says, "My gra... Read More

The Call To Battle

The Light Of The World

In verse 14 we have, surely, one of the most astounding and extraordinary statements about the Christian that was ever made, even by our Lord and Saviour Jesus Christ Himself. When you consider the setting, and remember the people to whom our Lord uttered these words, they do indeed become most rema... Read More

The Parable Of The Prodigal Son

THERE IS NO PARABLE OR SAYING OF OUR LORD that is quite as well-known and as familiar as the parable of the prodigal son. No parable is quite so frequently quoted in religious discussions or made use of to support theories and contentions. It is truly astonishing to note the almost endless number of... Read More

The Real Reason for Revival

And Moses said unto the Lord, See, thou sayest unto me, Bring up this people: and thou hast not let me know whom thou wilt send with me. Yet thou hast said, I know thee by name, and thou hast also found grace in my sight. Now therefore, I pray thee, if I have found grace in thy sight, shew me now th... Read More

The Salt Of The Earth

We now come to a new and fresh section in the Sermon on the Mount. In verses 3-12 our Lord and Saviour has been delineating the Christian character. Here at verse 13 He moves forward and applies His description. Having seen what the Christian is, we now come to consider how the Christian should mani... Read More

The Wrath Of God

We now come to look at the apostle's final statement about man in sin; and that is, that he is under the wrath of God. In other words Paul deals with sin, as sin affects man's standing before God. He shows what God says and thinks and does about man in that condition which we have already considered... Read More

The Wrath of God

Among whom also we all had our conversation in times past in the lusts of our flesh, fulfilling the desires of the flesh and of the mind; and were by nature the children of wrath, even as others. - Ephesians 2:3 We now come to look at the apostle's final statement about man in sin; and that is, that... Read More 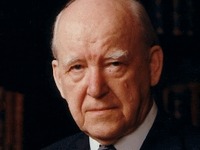 Lloyd-Jones was well known for his style of expository preaching, and the Sunday morning and evening meetings at which he officiated drew crowds of several thousand, as did the Friday evening Bible studies, which were, in effect, sermons in the same style. He would take many months, even years, to expound a chapter of the Bible verse by verse. His sermons would often be around fifty minutes to an hour in length, attracting many students from universities and colleges in London. His sermons were also transcribed and printed (virtually verbatim) in the weekly Westminster Record, which was read avidly by those who enjoyed his preaching. The MLJ Trust now archives all his audio messages preached over the years, a staggering 1600 sermons.

Lloyd-Jones retired from his ministry at Westminster Chapel in 1968, following a major operation. For the rest of his life, he concentrated on editing his sermons to be published, counselling other ministers, answering letters and attending conferences. Perhaps his most famous publication is a 14 volume series of commentaries on the Epistle to the Romans, the first volume of which was published in 1970.

This man of God was born in Wales and at the age of 13 moved to London in 1914. It was here that he as trained for a medical career and was associated with the famous Doctor Thomas Horder. During his medical years he was a much sought after physician and was well respected in his field.

He abandoned his medical career for the Gospel ministry, and served a pastor at the Presbyterian Church at Sandfields from 1927 to 1938. His teachings were respected by many including G. Campbell Morgan. He was offered and accepted the post as associate pastor under Dr. Morgan in 1938.

In 1943 when Dr. Morgan retired he succeeded him as Pastor of Westminster Chapel. His teaching attracted many and his lectures on Friday night where attended by a wide range of the populous. He was loved and admired for his dedication to the scriptures. Her retired in 1968, but was much sought after until his death.