Self-promotion. Self-preservation. Self-centeredness. It's all about me! Everyone told us it was all about us, didn't they? Weren't we urged to look out for number one? Find our place in the sun? Make a name for ourselves? We thought self-celebration would make us happy... But what chaos this philos... Read More 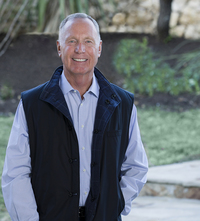 Max Lucado is a preacher with a storyteller’s gift—a pastor’s heart and a poet’s pen. Max’s sermons begin at home with the congregation at Oak Hills Church, which he has led for more than two decades. It is in this setting that his stories are first told, from a pastor’s heart. Eventually some of these sermons and stories are refined and fashioned into books that are shared far beyond the walls of Oak Hills and the city limits of San Antonio, Texas. Max’s words have traveled around the world in more than 41 languages via more than 100 million individual products.

Max Lucado’s first book, On the Anvil, was published in 1985. 2013 brings the release of Max’s 30th trade book, You’ll Get Through This (September), which beautifully illustrates Lucado’s ongoing mission to encourage the brokenhearted and to remind all readers of the healing love of God. Max and family moved back to Texas in 1988, and Max has been a minister at Oak Hills Church ever since. Max and Denalyn have three grown daughters, two in ministry, one in publishing, and one son-in-law, also serving in ministry.


Max Lucado is a best-selling Christian author and minister of writing and preaching at Oak Hills Church (formerly the Oak Hills Church of Christ) in San Antonio, Texas. Lucado has written more than 50 books with 28 million copies in print.

After serving as the pulpit minister for 20 years, Lucado announced in early 2007 that he was stepping down due to health concerns related to atrial fibrillation. Lucado has since assumed the ministry role of writing and preaching at Oak Hills. He co-pastors the church with one of Willow Creek's former teaching pastors, Randy Frazee.

Lucado was named "America's Pastor" by Christianity Today magazine and in 2005 was named by Reader's Digest as "The Best Preacher in America." He has been featured on The Fox News Channel, NBC Nightly News, Larry King Live, and USA Today. His books are regularly on the New York Times Best Seller List. He has been featured speaker at the National Prayer Breakfast. ... Show more
Read More
Subscribe