THERE is one thing that was always prominent in the great Revivals of past days, viz., a deep and a true conviction of sin. And it is one of the vital elements that is lacking today. How disappointing are the methods of present-day Evangelism! How shallow and unreal when compared with the genuine wo... Read More

FAITH is the key that unlocks the door of God's power. "By faith the walls of Jericho fell down." And in revival work one of the indispensable prerequisites is a living, vital Faith. "All things are possible to him that believeth." The man who is to be used of the Lord will hear from Heaven. God wil... Read More

IT was in the years 1917 and 1918 that the yearnings for revival expressed in these messages were born of God. Nothing of a spectacular nature took place for the work was of a wholly local character, nor did it seem to reach full fruition at the time. It was, however, a wonderful personal preparatio... Read More

OCTOBER 17th DAY by day we have been meeting as usual for prayer. Today we began at 9:30 this morning and continued until after 3:00. We have been asking God to break us for many weeks. About 2:00 this afternoon I was praying when suddenly I stopped and began to praise God. Tears flowed copiously. A... Read More

No Substitute for Prayers!

Intercessory prayer is the Christian's most effective weapon. Nothing can withstand it's power. It will do things when all else has failed. And the marvel is that we turn to other agencies in order to accomplish what only prayer can bring to pass. God has placed this mighty weapon in our hands, and ... Read More

There is only one obstacle that can block up the channel and choke God's power, and that is SIN. Sin is the great barrier. It alone can hinder the work of the Spirit and prevent a Revival. "If I regard iniquity in my heart," declared David, "The Lord will not hear me." (Psalm 66:18.) And in Isaiah 5... Read More

Can we travail for a drowning child, but not for a perishing soul? It is not hard to weep when we realize that our little one is sinking below the surface for the last time. Anguish is spontaneous then. Nor is it hard to agonize when we see the casket containing all that we love on earth borne out o... Read More

MAY 22nd IT is coming to me more and more to challenge my work; to test and prove everything. I feel quite certain that one of the outstanding reasons for failure lies in the fact that we do not judge ourselves. I must challenge my preaching. God claims that His Word is a fire, a hammer, and a sword... Read More

The Enduement of Power

The Holy Spirit is able to make the Word as successful now as in the days of the apostles. He can bring in souls by hundreds and thousands as well as by ones and twos. The reason why we are no more prosperous is that we have not the Holy Spirit with us in might and power as in early times. "If we ha... Read More

The Outpouring of the Spirit

IT was in 1904. All Wales was aflame. The nation had drifted far from God. The spiritual conditions were low indeed. Church attendance was poor. And sin abounded on every side. Suddenly, like an unexpected tornado. the Spirit of God swept over the land. The Churches were crowded so that multitudes w... Read More

The Responsibility for Revival

AS far back as I can remember my heart has burned within me whenever I have heard or read accounts of the mighty work of God in the great Revivals of past years. The heroic missionaries of the cross in foreign lands, and the lonely men of God in the home field around whom these gracious Visitations ... Read More

Oswald J. Smith is one of the most versatile Christian leaders in the history of the Christian church. Perhaps never has one man done so many different things well. It all centered in Toronto, Ontario, where Smith pastored from 1915 to 1959. He raised some $14,000,000.00 for foreign missions, more t... Read More

The Life of Dr. Oswald Smith

Dr. Oswald Smith was born in a farmhouse on the outskirts of Odessa, Ont., Nov. 8th, 1889. His father was a telegraph operator; thus his childhood days were spent in railway stations. The time spent in Mount Albert, Ont., a small, quiet country town, where he used to live for a while, has never been... Read More

Through the crowded streets of Toronto, Canda, we slowly picked our way. Construction of a new subway caused numerous delays and detours. At long last, we found The Peoples Church and pulled into the parking area. It was a Monday afternoon, but there were a surprising number of cars there. The churc... Read More

For salvation full and free, Purchased once on Calvary, Christ alone shall be my plea-- Jesus! Jesus only. Refrain Jesus only, let me see, Jesus only, none save He, Then my song shall ever be-- Jesus! Jesus only! He my Guide from day to day, As I journey on life's way; Close beside Him let me stay--... Read More

Put Your Money into the Message

Who Can Pay So Much?

The Russian Czar used to love to disguise himself and mingle with his subjects to hear what they might have to say. One night he visited the barracks and listened to the conversation of the soldiers. While passing a tent he observed a young officer sitting at a table with his head on his arm, sound ... Read More 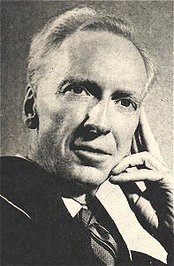 Was a Canadian pastor, author, and missions advocate. He founded The People's Church in Toronto in 1928. Over the course of eighty years he preached more than 12,000 sermons in 80 countries, wrote thirty-five books (with translations into 128 languages), as well as 1,200 poems, of which 100 have been set to music, including "Deeper and Deeper" (first line "Into the heart of Jesus").

The great burden of Oswald J. Smith's Christian life was to see the lost come to the Lord. He was well known for the motto: "We talk of the Second Coming; half the world has never heard of the first." and "No one has the right to hear the gospel twice, while there remains someone who has not heard it once."

Although he was the long-time pastor of the large and influential Peoples Church in Toronto, Ontario, the name of Oswald J. Smith is most often associated with missions. Born in 1889 in Ontario, at the age of sixteen he attended an evangelistic crusade held by R. A. Torrey and Charles Alexander, where he was saved. Two years later he began Bible College, eventually graduating from both college and seminary. His burden for missions showed up early in life. He applied with a foreign missions board, but they turned him down because of concerns about poor health he had suffered throughout his childhood (a problem which he apparently overcame, since he later worked both in the backwoods of Canada and the mountains of Kentucky, then lived into his late nineties).

If he couldn't go as a missionary, he determined to start a church that would send out missionaries. In 1928 Smith started the Peoples Church, originally called the Cosmopolitan Tabernacle. As a young man he had asked God to enable him to give more than he would ordinarily be able to give, and the blessings he experienced helped him institute faith promise missions giving. With this plan, churches have given multiplied millions to send the Gospel throughout the world. He also established mission works to reach the northern parts of Canada, to reach Jews and to distribute tracts. In addition to his pastoral and missions works, he wrote 1200 poems and hymn lyrics, over 200 of which were set to music. His earthly work ended at his homegoing in 1986.