THERE is one man who is pictured to us in the Bible who appears to be more like Christ than any other man of whose life we have an account. That man is Stephen, the first deacon in the Christian church, and the first Christian martyr. There is no fairer life recorded in history than that of Stephen,... Read More

A Solemn Question For Those Who Are Rejecting Christ That They May Obtain The World.

"What shall it profit a man if he shall gain the world, and lose his own soul?" Mark viii. 36. That question ought to set thinking every man and woman here tonight, who, because of love of the world is refusing Jesus Christ. 1. Will you please notice in the first place the two things that are contra... Read More

The value of an apt illustration can hardly be over-estimated. It is oftentimes the entering wedge or the clinching conclusion for the more serious argument. At times it is both. Mr. D. L. Moody used to say that a sermon without illustrations was like a house without windows. To one of his ablest as... Read More

A Deacon Who Went Fishing on Sunday One night when I arose to preach in the Chicago Avenue Church I saw sitting just to my left in the front seat underneath the gallery one of my deacons and side by side with him a flashily-dressed and hard-looking man. I at once concluded that he was a sporting man... Read More

How the Sun Burst Through the Clouds On the day of fasting and prayer in Dundee, the rain poured down in torrents during the morning hour of meeting. We were planning for a meeting at two o'clock in the afternoon in the open air. One of the brethren as he led in prayer, offered a very earnest and co... Read More

Rescued One night at a late meeting in the Florence Crittenton mission in New York a drunken Scotch girl ran to the front screaming, "Pray for me! Pray for me!" After the meeting was over, the workers gathered around her. She told how she had wandered from home. How her mother lived in New York City... Read More

Are You a Murderer? I WAS sitting one day with a very brilliant lawyer in the city of Minneapolis, who was beginning to go down through drink. He was partly intoxicated this day. I said to him, "John, you ought to be a Christian." "Oh," he said, with a laugh, "I don't believe as you do. I am one of ... Read More

"Earth has no Sorrow That Jesus Cannot Heal" Some time ago, in America, there were a gentleman and his wife who had a very happy home. The man was prosperous in business in the city of Cleveland, but there came a reverse in business, and the man lost everything he had in the world. The home was brok... Read More

How D. L. Moody Became a World-Wide Evangelist Mr. Moody once told me this story long after the incident occurred. He went over to London in 1872, when his church lay in ashes, and while his new church in Chicago was building, not in order to preach, but to listen to others who, he thought, could pr... Read More

"God Use This Stammering Tongue" One day during his great mission in London, Mr. Moody was holding a meeting in a theatre packed with a most select audience. Noblemen and noble-women were there in large numbers. A prominent member of the royal family was in the royal box. Mr. Moody arose to read the... Read More

Are You Criticizing God?

THESE WORDS ought to awaken anyone who is not utterly beyond hope. Notice the first two words and the last word. "0 man" and "God." "0 man, who art thou that repliest against God?" Here God and man are put in sharpest contrast, God in His infinite greatness and wisdom and man in his infinitesimal sm... Read More

There is nothing more important in the Christian life than beginning right. If we begin right, we can go on right. If we begin wrong, the whole life that follows is likely to be wrong. If anyone who reads these pages has begun wrong, it is a very simple matter to begin over again and begin right. Wh... Read More

Did I Miss God's Will for My Life?

I recently received a letter from one who is evidently an earnest Christian woman but who was in a condition of great depression because some years ago, when in college, she felt that perhaps she was called to go to China but did not want to go but became engaged to a Christian man, whom she married... Read More

Difficulties in the Bible Introduction

Alleged Errors and Contradictions By R. A. TORREY This book does not attempt to take up in detail every conceivable difficulty that could be found in the Bible. It would take many volumes to do that. I have simply taken up those objections of which the modern infidel makes the most, and which are mo... Read More

Difficulties in the Bible: 1. A General Statement of the Case

Every careful student and every thoughtful reader of the Bible finds that the words of the Apostle Peter concerning the Scriptures, that there are some things in them hard to be understood, "which they that are unlearned and unstable wrest . . . unto their own destruction" (2 Peter 3:16), are abunda... Read More

All the difficulties found in the Bible can be included under ten general headings: 1. The text from which our English Bible was translated. No one, as far as I know, holds that the English translation of the Bible is absolutely infallible and inerrant. The doctrine held by many is that the Scriptur... Read More

Before taking up those specific difficulties and alleged "contradictions" in the Bible which have caused the most trouble to seekers after truth, let us first consider how difficulties should be dealt with: 1. Honestly. Whenever you find a difficulty in the Bible frankly acknowledge it. Don't try to... Read More

Difficulties in the Bible: 4. Genesis One-Historical and Scientific?

There is no part of the Bible that the more scholarly opponents of its divine origin are more fond of attacking than the very first chapter in the Book. Time and again have we been assured that the teachings of this chapter are in hopeless conflict with the best established conclusions of modern sci... Read More

One of the questions that is greatly puzzling many Bible scholars today is how to reconcile the chronology of the Bible with discoveries that are being made as to the antiquity of man. It is said that the Bible chronology allows only about four thousand years from Adam to Christ, but the Egyptian an... Read More

Difficulties in the Bible: 6. Where Did Cain Get His Wife?

In almost every place that I have visited in going around the world I have given skeptics and others an opportunity of asking questions at one or two meetings. I do not think that I have ever held a question meeting at which someone has not put in the question "Where did Cain get his wife?" This see... Read More 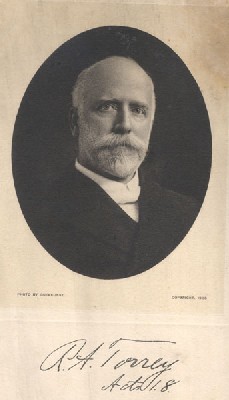 Reuben Archer Torrey was one of America's best-known evangelists and Bible teachers. He was educated at Yale and also at various German universities. During his early years he went through a time of extreme skepticism, but emerged as a staunch preacher of the faith.

In 1889, while in the pastorate, D. L. Moody invited him to become become the superintendent of his new school in Chicago (now the Moody Bible Institute.) He also served as pastor to the Chicago Avenue Church, now the Moody Church. He and Charles Alexander conducted evangelistic meetings together in many parts of the world.

From the years 1912-19 R A Torrey served as dean of the Bible Institute of Los Angeles. He also served from 1914 as pastor of the Church of the Open Door. From 1924 to his death, he ministered in conferences and taught at the Moody Bible Institute.