A Brother who is sent out on some business

A Brother who is sent out on some business and is expected to return to the monastery that same day shall not presume to eat while he is out, even if he is urgently requested to do so by any person whomsoever, unless he has permission from his Abbot. And if he acts otherwise, let him be excommunicat... Read More

Above all let her not neglect or undervalue

Above all let her not neglect or undervalue the welfare of the souls committed to her, in a greater concern for fleeting, earthly, perishable things; but let her always bear in mind that she has undertaken the government of souls and that she will have to give an account of them. And if she be tempt... Read More

Above all things let him have humility

Above all things let him have humility; and if he has nothing else to give let him give a good word in answer for it is written, "A good word is above the best gift" (Eccles. 18:17). Let him have under his care all that the Abbot has assigned to him, but not presume to deal with what he has forbidde... Read More

Although human nature itself is drawn to special kindness

Although human nature itself is drawn to special kindness towards these times of life, that is towards the old and children, still the authority of the Rule should also provide for them. Let their weakness be always taken into account, and let them by no means be held to the rigor of the Rule with r... Read More

Although the life of a monk

Although the life of a monk ought to have about it at all times the character of a Lenten observance, yet since few have the virtue for that, we therefore urge that during the actual days of Lent the brethren keep their lives most pure and at the same time wash away during these holy days all the ne... Read More

An Abbess who is worthy to be over a monastery

An Abbess who is worthy to be over a monastery should always remember what she is called, and live up to the name of Superior. For she is believed to hold the place of Christ in the monastery, being called by a name of His, which is taken from the words of the Apostle: "You have received a Spirit of... Read More

An hour before the meal

An hour before the meal let the weekly servers each receive a drink and some bread over and above the appointed allowance, in order that at the meal time they may serve their brethren without murmuring and without excessive fatigue. On solemn days, however, let them wait until after Mass. Immediatel... Read More

And so we are going to establish

And so we are going to establish a school for the service of the Lord. In founding it we hope to introduce nothing harsh or burdensome. But if a certain strictness results from the dictates of equity for the amendment of vices or the preservation of charity, do not be at once dismayed and fly from t... Read More

And the Lord, seeking his laborer

And the Lord, seeking his laborer in the multitude to whom He thus cries out, says again, "Who is the one who will have life, and desires to see good days" (Ps. 33[34]:13)? And if, hearing Him, you answer, "I am the one," God says to you, "If you will have true and everlasting life, keep your tongue... Read More

Anyone who does not come to table before the verse

Anyone who does not come to table before the verse, so that all together may say the verse and the oration and all sit down to table at the same time-- anyone who through his own carelessness or bad habit does not come on time shall be corrected for this up to the second time. If then he does not am... Read More

As cellarer of the monastery

As cellarer of the monastery let there be chosen from the community one who is wise, of mature character, sober, not a great eater, not haughty, not excitable, not offensive, not slow, not wasteful, but a God-fearing man who may be like a father to the whole community. Let him have charge of everyth... Read More

As for self-will, we are forbidden to do our own will by the Scripture, which says to us, "Turn away from your own will" (Eccles. 18:30), and likewise by the prayer in which we ask God that His will be done in us. And rightly are we taught not to do our own will when we take heed to the warning of S... Read More

At Terce, Sext and None on Monday

At the gate of the monastery

At the gate of the monastery let there be placed a wise old woman, who knows how to receive and to give a message, and whose maturity will prevent her from straying about. This porter should have a room near the gate, so that those who come may always find someone at hand to attend to their business... Read More

At the hour for the Divine Office

At the hour for the Divine Office, as soon as the signal is heard, let them abandon whatever they may have in hand and hasten with the greatest speed, yet with seriousness, so that there is no excuse for levity. Let nothing, therefore, be put before the Work of God. If at the Night Office anyone arr... Read More

Before all things and above all things, care must be taken of the sick, so that they will be served as if they were Christ in person; for He Himself said, "I was sick, and you visited Me" (Matt 25:36), and, "What you did for one of these least ones, you did for Me" (Matt. 25:40). But let the sick on... Read More

But if as a guest she was found exacting or prone to vice, not only should she be denied membership in the community, but she should even be politely requested to leave, lest others be corrupted by her evil life. If, however, she has not proved to be the kind who deserves to be put out, she should n... Read More

But this very obedience

But this very obedience will be acceptable to God and pleasing to all only if what is commanded is done without hesitation, delay, lukewarmness, grumbling, or objection. For the obedience given to Superiors is given to God, since He Himself has said, "He who hears you, hears Me" (Luke 10:16). And th... Read More

Care must be taken that no monk

Care must be taken that no monk presume on any ground to defend another monk in the monastery, or as it were to take him under his protection, even though they be united by some tie of blood-relationship. Let not the monks dare to do this in any way whatsoever, because it may give rise to most serio... Read More

If it happens that difficult or impossible tasks are laid on a sister, let her nevertheless receive the order of the one in authority with all meekness and obedience. But if she sees that the weight of the burden altogether exceeds the limit of her strength, let her submit the reasons for her inabil... Read More 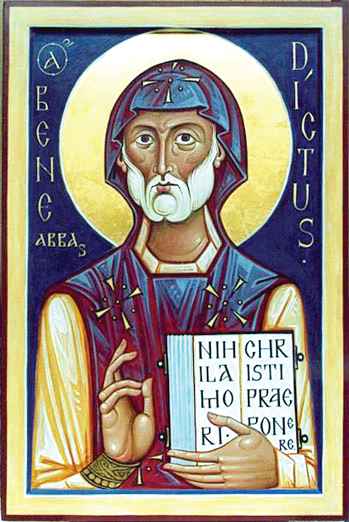 Benedict founded twelve communities for monks at Subiaco, Italy (about 40 miles (64 km) to the east of Rome), before moving to Monte Cassino in the mountains of southern Italy. The Catholic Order of St Benedict and the Anglican Order of St Benedict are of later origin and, moreover, not an "order" as commonly understood but merely a confederation of autonomous congregations.

Benedict's main achievement is his "Rule of Saint Benedict", containing precepts for his monks. It is heavily influenced by the writings of John Cassian, and shows strong affinity with the Rule of the Master. But it also has a unique spirit of balance, moderation and reasonableness (ἐπιείκεια, epieikeia), and this persuaded most religious communities founded throughout the Middle Ages to adopt it. As a result, his Rule became one of the most influential religious rules in Western Christendom. For this reason, Benedict is often called the founder of western monasticism.