Prayer is by nature a dialog and a union of man with God Its effect is to hold the world together. It achieves a reconciliation with God. Prayer is the mother and daughter of tears. It is an expiation of sin, a bridge across temptation, a bulwark against affliction. It wipes out conflict, is the wor... Read More

Step 1 On renunciation of the world

1. Our God and King is good, ultra-good and all-good (it is best to begin with God in writing to the servants of God). Of the rational beings created by Him and honoured with the dignity of free-will, some are His friends, others are His true servants, some are worthless, some are completely estrang... Read More

Step 10 On slander or calumny.

1. No sensible person, I think, will dispute that slander is born of hatred and malice. Therefore it comes next in order after its forebears. 2. Slander is an offspring of hatred, a subtle yet coarse disease, a leech lurking unfelt, wasting and draining the blood of charity. It is simulation of love... Read More

Step 11 On talkativeness and silence.

1. In the preceding chapter we spoke briefly of how extremely dangerous it is to judge others and of how this vice steals into even the most apparently spiritual people; and how it is better to subject oneself to condemnation and punishment by the tongue. Now we must show the cause of this vice, and... Read More

1. The offspring of flint and steel is fire; and the offspring of chatter and joking is lying. 2. A lie is the destruction of love, and perjury is a denial of God. 3. Let no one with right principles suppose that the sin of lying is a small matter, for the All-Holy Spirit pronounced the most awful s... Read More

1. As we have already frequently said, this—we mean despondency—is very often one of the branches of talkativeness, and its first child. And so we have given it its appropriate place in this chain of vices. 2. Despondency is a slackness of soul, a weakening of the mind, neglect of asceticism, hatred... Read More

Step 14 On the clamorous , yet wicked master—the stomach.

1. We have been attacking ourselves in everything that we have said, but this is specially so when we speak about the stomach. For I wonder if anyone has got free of this master before settling in the grave. 2. Gluttony is hypocrisy of the stomach; for when it is glutted it complains of scarcity, an... Read More

Step 15 On incorruptible purity and chastity to which the corruptible attain by toil and sweat.

We have heard from that raving mistress gluttony who has just spoken, that her offspring is war against bodily chastity. And this is not surprising since our ancient forefather Adam teaches us this too. For if he had not been overcome by his stomach he would not have known what a wife was.3 That is ... Read More

STEP 16 On love of money or avarice

1. Many learned teachers treat next, after the tyrant just described, the thousand-headed demon of avarice. We, unlearned as we are, did not wish to change the order of the learned, and we have therefore followed the same convention and rule. So let us first say a little about the disease, and then ... Read More

Step 17 On poverty (that hastens heavenwards).

1. Poverty is the resignation of cares, life without anxiety, an unencumbered traveller, alienation from sorrow, fidelity to the commandments. 2. A poor monk is lord of the world. He has entrusted his cares to God and by faith has obtained all men as his slaves. He will not tell his need to man, and... Read More

1. Insensibility both in the body and in the spirit is deadened feeling, which from long sickness and negligence lapses into loss of feeling. 2. Insensibility is negligence that has become habit; benumbed thought; the birth of presumption; a snare for zeal; the noose of courage; ignorance of compunc... Read More

Step 19 On sleep, prayer, and psalm-singing in chapel.

1. Sleep is a particular state of nature, an image of death, inactivity of the senses. Sleep is one, but, like desire, its sources and occasions are many: that is to say, it comes from nature, from food, from demons, or perhaps, sometimes, from extreme and prolonged fasting, through which the flesh ... Read More

1. The man who really loves the Lord, who has made a real effort to find the coming Kingdom, who has really begun to be troubled by his sins, who is really mindful of eternal torment and judgment, who really lives in fear of his own departure, will not love, care or worry about money, or possessions... Read More

1. Some stand before earthly kings without weapons and without armour, others hold staffs of office, and some have shields, and some swords. The former are vastly superior to the latter, for they are usually personal relations of the king and members of the royal household. So it is with earthly kin... Read More

Step 21 On unmanly and puerile cowardice.

1. If you pursue virtue in a monastery or community, you are not likely to be attacked much by fear. But the man who spends his time in more solitary places should make every effort to avoid being overcome by that offspring of vainglory, that daughter of unbelief, cowardice. 2. Cowardice is a childi... Read More

Step 22 On the many forms of vainglory

1. Some like to distinguish vainglory from pride and to give it a special place and chapter. And so they say that there are eight capital and deadly sins3. But Gregory the Theologian and other teachers have given out that there are seven; and I am strongly inclined to agree with them. For who that h... Read More

Step 23 On mad2 pride, and, in the same Step, on unclean blasphemous thoughts.

1. Pride is denial of God, an invention of the devil, the despising of men, the mother of condemnation, the offspring of praise, a sign of sterility, flight from divine assistance, the precursor of madness, the herald of falls, a foothold for satanic possession, source of anger, door of hypocrisy, t... Read More

Step 24 On meekness, simplicity, guilelessness which come not from nature but from habit, and about malice

1. The morning light precedes the sun, and the precursor of all humility is meekness. Therefore let us hear in what order the Light arranges these virtues, for He says: Learn of Me, for I am meek and humble in heart.4 So then before looking at the sun, which is humility, we must be illumined by the ... Read More

Step 25 On the destroyer of the passions, most sublime humility, which is rooted in spiritual feeling

1. He who thinks that it is possible to use the visible word in order to describe the sensation and effect of the love of the Lord exactly, holy humility gracefully, blessed purity truly, divine enlightenment clearly, the fear of God honestly, assurance of heart sincerely, and imagines that by his d... Read More

Step 26 On discernment of thoughts, passions and virtues

1. Discernment in beginners is true knowledge of themselves; in intermediate souls it is a spiritual sense that faultlessly distinguishes what is truly good from what is of nature and opposed to it; and in the perfect it is the knowledge which they possess by divine illumination, and which can enlig... Read More 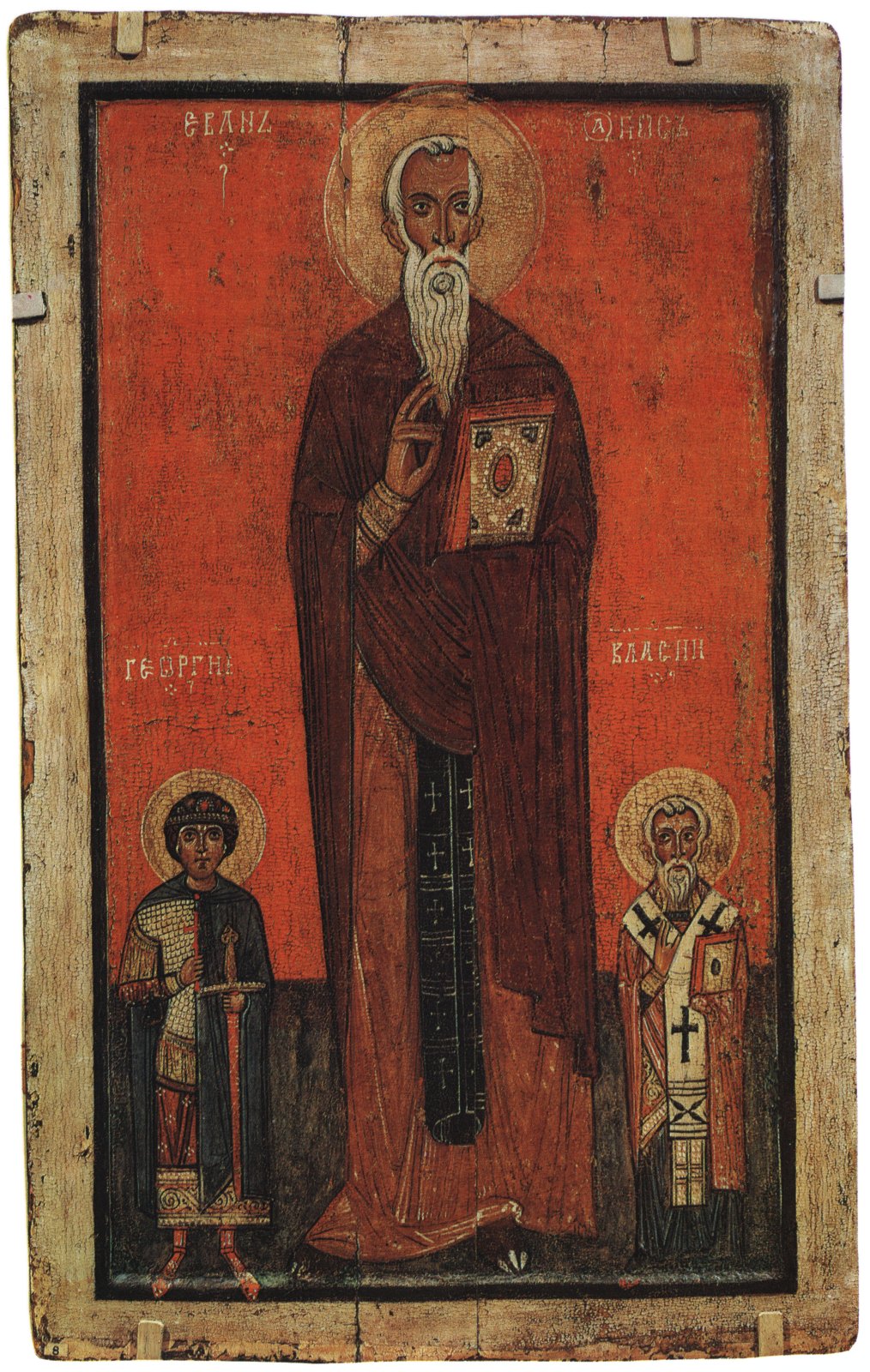 Also known as John of the Ladder, John Scholasticus and John Sinaites, was a 6th-7th-century Christian monk at the monastery on Mount Sinai. He is revered as a saint by the Roman Catholic, Eastern Orthodox and Eastern Catholic churches. Of John's literary output we know only the Κλῖμαξ (Latin: Scala Paradisi) or Ladder of Divine Ascent, composed in the early seventh century at the request of John, Abbot of Raithu, a monastery situated on the shores of the Red Sea, and a shorter work To the Pastor (Latin: Liber ad Pastorem), most likely a sort of appendix to the Ladder. It is in the Ladder' that we hear of the ascetic practice of carrying a small notebook to record the thoughts of the monk during contemplation.

The Ladder describes how to raise one's soul and body to God through the acquisition of ascetic virtues. Climacus uses the analogy of Jacob's Ladder as the framework for his spiritual teaching. Each chapter is referred to as a "step", and deals with a separate spiritual subject. There are thirty Steps of the ladder, which correspond to the age of Jesus at his baptism and the beginning of his earthly ministry. Within the general framework of a 'ladder', Climacus' book falls into three sections. The first seven Steps concern general virtues necessary for the ascetic life, while the next nineteen (Steps 8–26) give instruction on overcoming vices and building their corresponding virtues. The final four Steps concern the higher virtues toward which the ascetic life aims. The final rung of the ladder—beyond prayer (προσευχή), stillness (ἡσυχία), and even dispassion (ἀπάθεια)—is love (ἀγάπη).