"For the Glory of God"

From "The Work of the Ministry" - Volume 1. "This sickness is not unto death, but for the glory of God, that the Son of God may be glorified thereby" (John 11:4). "He that was dead came forth, bound hand and foot with graveclothes; and his face was bound about with a napkin. Jesus saith unto them, L... Read More

From "This Ministry" - Messages given at Honor Oak - Volume 3 "Thomas saith unto him, Lord, we know not whither thou goest; and how can we know the way?" (John 14:5). The chapter in which the above words occur is a chapter of questions. Mental perplexity prevails on the side of the disciples. Strang... Read More

We are going to resume our meditations on union with Christ. Having been occupied with Christ Himself, the meaning of Christ, seeking to set the background, lay the foundation, in some little understanding of His greatness and of His place, we now should be able to follow on with the meaning of our ... Read More

"Now Elijah said to Ahab, "Go up, eat and drink; for there is the sound of the roar of a heavy shower." So Ahab went up to eat and drink. But Elijah went up to the top of Carmel; and he crouched down on the earth, and put his face between his knees. And he said to his servant, "Go up now, look towar... Read More

In the Book of the Acts

In the Letter to the Colossians

[The following note written by TAS preceded this chapter in the magazine: "Note: In the sequence of this series of messages, the next in order would be the Letter to the Philippians. This has been included in the other series - last month's issue, "The Battle for Life". Hence, we proceed to "Colossi... Read More

In the Spirit or in the World

"And there came one of the seven angels... and he spake with me, saying, Come hither, I will shew thee the bride, the wife of the Lamb. And he carried me away in the Spirit to a mountain great and high, and shewed me the holy city Jerusalem, coming down out of heaven from God, having the glory of Go... Read More

Power With God Exemplified in Job

Reading: Job 1:6-11; 2:9,10; 42:7,8,10 Job’s Spiritual History Job is introduced to us as a man in great fullness: fullness of possessions and of wealth, fullness of good works and of personal righteousness, and standing before God in acceptance. Then there begins a course in his experience, the mea... Read More

Power With God Exemplified in Moses

The Cross And The Person Of Christ

The Kingdom and the Church

"In those days cometh John the Baptist, preaching in the wilderness of Judaea, saying, Repent ye, for the kingdom of heaven is at hand" (Matthew 3:1,2). "I... say unto thee, that I will build my church; and the gates of Hades shall not prevail against it" (Matthew 16:18). "And if he refuse to hear t... Read More

The Man in the Message

This is not intended to be a “Life of the Apostle Paul,” but has rather to do with the particular significance of this servant of Jesus Christ. While there are those vital and essential factors in his case which must be true of every servant of Christ, and which are basic to every fruitful ministry ... Read More

The Mystery of the Gospel

"The mystery of the gospel" (Eph. 6:19). "I shrank not from declaring unto you the whole counsel of God" (Acts 20:27). "...in whom also we were made a heritage, having been foreordained according to the purpose of him who worketh all things after the counsel of his will" (Eph. 1:11). We have remarke... Read More

The Operation of the Kingdom of God

In the thirteenth chapter of the Gospel by Matthew, which we may have open before us by way of reminder, we find the operation of the Kingdom illustrated in a sevenfold way. THE PARABLES OF THE KINGDOM I do not propose to attempt an exposition of that sevenfold way, but will simply lift out from the... Read More

Titles of the Risen Lord

Square brackets [ ] indicate interpolations, queries or corrections made by the transcriber that were not in the original spoken message. We are today occupied with the Resurrection side of the Cross, and this afternoon I’m going to ask you to consider with me some of the titles of the Risen Lord: t... Read More

"I will build my church" (Matthew 16:18). "Christ was faithful over God's house as a son. And we are his house, if we hold fast our confidence firm unto the end" (Hebrews 2:6, R.S.V. margin). "Christ Jesus... in whom each several building, fitly framed together, groweth into a holy temple in the Lor... Read More

We have been occupied thus far with a re-statement of that testimony for which we believe the Lord raised up this instrumentality and this ministry at the beginning, now many years ago. To us, the purpose of the Lord in the ministry and in the corporate instrument which He brought into being came to... Read More

"A House of Prayer For All People"

Reading: 2 Chronicles 6; Isaiah 56:6-7; Mark 11:17; Ephesians 6:18. "My house shall be called an house of prayer for all people." The sixth chapter of the second book of Chronicles is a magnificent example and illustration of these words of the Prophet. In the dedication of the House by Solomon, pra... Read More

"A Man in Christ"

"I know a man in Christ" (2 Corinthians 12:2) The object of our consideration is manhood in relation to the Lord's testimony, and for it we take a little phrase used by the apostle Paul about himself: "I knew a man in Christ". To it may be linked a few other simple phrases: "I JESUS have sent my ang... Read More 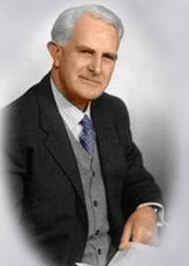 He was ordained as a Baptist pastor at the age of 24, and from 1912 to 1926 led three congregations in Greater London. During these years, he was also closely related to Jessie Penn-Lewis and her publication and speaking ministry, the "Overcomer Testimony."

Among the many books that he wrote, at least three are regarded as Christian classics: The School of Christ, The Centrality and Supremacy of the Lord Jesus Christ and We Beheld His Glory. The primary theme of Sparks' books is the exaltation of the Lord Jesus Christ. He mentored Watchman Nee for many years and was very influential in his understanding of the Church Life.


"Mr Sparks", as he was affectionately known, was born in London, England in 1888. He came to know Christ as a teenager and later became a Baptist pastor. However, his "ecclesiastical" career took a decidedly different direction when a physical crisis brought him to a place of brokenness.

At the same time God also delivered him from his previous prejudice against anything that was related to the "deeper life". As a result, he joined Jessie Penn-Lewis in the ministry of the spiritual growth of believers; a ministry to which he devoted his life and which also cost him his reputation and his career in the denominational circles of England.

He was based in southeast London at Honor Oak Christian Fellowship which is where Watchman Nee met and fellowshipped with him during a visit to England in 1933. Nee's refusal to disavow Austin-Sparks later became the grounds for him being disfellowshipped by the Taylor Brethren. It has been said that Watchman Nee considered Austin-Sparks as his spiritual mentor, and their fellowship appears to have been rich and fruitful.