Sermons & Devotionals by Thomas a Kempis

A MAN OUGHT NOT TO CONSIDER HIMSELF WORTHY OF CONSOLATION, BUT RATHER DESERVING OF CHASTISEMENT

THE VOICE OF CHRIST MY CHILD, patience and humility in adversity are more pleasing to Me than much consolation and devotion when things are going well. Why are you saddened by some little thing said against you? Even if it had been more you ought not to have been affected. But now let it pass. It is... Read More

A MAN SHOULD NOT BE UNDULY SOLICITOUS ABOUT HIS AFFAIRS

THE VOICE OF CHRIST MY CHILD, always commit your cause to Me. I will dispose of it rightly in good time. Await My ordering of it and it will be to your advantage. THE DISCIPLE Lord, I willingly commit all things to You, for my anxiety can profit me little. But I would that I were not so concerned ab... Read More

ABOVE ALL GOODS AND ALL GIFTS WE MUST REST IN GOD

THE DISCIPLE ABOVE all things and in all things, O my soul, rest always in God, for He is the everlasting rest of the saints. Grant, most sweet and loving Jesus, that I may seek my repose in You above every creature; above all health and beauty; above every honor and glory; every power and dignity; ... Read More

ACQUIRING PATIENCE IN THE FIGHT AGAINST CONCUPISCENCE

THE DISCIPLE PATIENCE, O Lord God, is very necessary for me, I see, because there are many adversities in this life. No matter what plans I make for my own peace, my life cannot be free from struggle and sorrow. THE VOICE OF CHRIST My child, you are right, yet My wish is not that you seek that peace... Read More

ALL HOPE AND TRUST ARE TO BE FIXED IN GOD ALONE

THE DISCIPLE WHAT, Lord, is the trust which I have in this life, or what is my greatest comfort among all the things that appear under heaven? Is it not You, O Lord, my God, Whose mercies are without number? Where have I ever fared well but for You? Or how could things go badly when You were present... Read More

ALL MEN ARE NOT TO BE BELIEVED, FOR IT IS EASY TO ERR IN SPEECH

THE DISCIPLE GRANT me help in my needs, O Lord, for the aid of man is useless. How often have I failed to find faithfulness in places where I thought I possessed it! And how many times I have found it where I least expected it! Vain, therefore, is hope in men, but the salvation of the just is in You... Read More

ALL OUR CARE IS TO BE PLACED IN GOD

THE VOICE OF CHRIST MY CHILD, allow me to do what I will with you. I know what is best for you. You think as a man; you feel in many things as human affection persuades. THE DISCIPLE Lord, what You say is true. Your care for me is greater than all the care I can take of myself. For he who does not c... Read More

ALL THINGS SHOULD BE REFERRED TO GOD AS THEIR LAST END

THE VOICE OF CHRIST MY CHILD, I must be your supreme and last end, if you truly desire to be blessed. With this intention your affections, which are too often perversely inclined to self and to creatures, will be purified. For if you seek yourself in anything, you immediately fail interiorly and bec... Read More

WHY do you look for rest when you were born to work? Resign yourself to patience rather than to comfort, to carrying your cross rather than to enjoyment. What man in the world, if he could always have them, would not readily accept consolation and spiritual joy, benefits which excel all earthly deli... Read More

AVOIDING CURIOUS INQUIRY ABOUT THE LIVES OF OTHERS

THE VOICE OF CHRIST MY CHILD, do not be curious. Do not trouble yourself with idle cares. What matters this or that to you? Follow Me. What is it to you if a man is such and such, if another does or says this or that? You will not have to answer for others, but you will have to give an account of yo... Read More

VAIN is the man who puts his trust in men, in created things. Do not be ashamed to serve others for the love of Jesus Christ and to seem poor in this world. Do not be self-sufficient but place your trust in God. Do what lies in your power and God will aid your good will. Put no trust in your own lea... Read More

SHUN the gossip of men as much as possible, for discussion of worldly affairs, even though sincere, is a great distraction inasmuch as we are quickly ensnared and captivated by vanity. Many a time I wish that I had held my peace and had not associated with men. Why, indeed, do we converse and gossip... Read More

THE VOICE OF CHRIST MY CHILD, do not let the fine-sounding and subtle words of men deceive you. For the kingdom of heaven consists not in talk but in virtue. Attend, rather, to My words which enkindle the heart and enlighten the mind, which excite contrition and abound in manifold consolations. Neve... Read More

CONFESSING OUR WEAKNESS IN THE MISERIES OF LIFE

THE DISCIPLE I WILL bring witness against myself to my injustice, and to You, O Lord, I will confess my weakness. Often it is a small thing that makes me downcast and sad. I propose to act bravely, but when even a small temptation comes I find myself in great straits. Sometimes it is the merest trif... Read More

THE DISCIPLE YOU thunder forth Your judgments over me, Lord. You shake all my bones with fear and trembling, and my soul is very much afraid. I stand in awe as I consider that the heavens are not pure in Your sight. If You found wickedness in the angels and did not spare them, what will become of me... Read More

CONTEMPT FOR ALL EARTHLY HONOR

THE VOICE OF CHRIST MY CHILD, do not take it to heart if you see others honored and advanced, while you yourself are despised and humbled. Lift up your heart to Me in heaven and the contempt of men on earth will not grieve you. THE DISCIPLE Lord, we are blinded and quickly misled by vanity. If I exa... Read More

DO NOT BE CONCERNED ABOUT OUTWARD THINGS

THE VOICE OF CHRIST MY CHILD, there are many matters of which it is well for you to be ignorant, and to consider yourself as one who is dead upon the earth and to whom the whole world is crucified. There are many things, too, which it is well to pass by with a deaf ear, thinking, instead, of what is... Read More

DO NOT LIGHTLY FOREGO HOLY COMMUNION

THE VOICE OF CHRIST YOU must often return to the source of grace and divine mercy, to the fountain of goodness and perfect purity, if you wish to be free from passion and vice, if you desire to be made stronger and more watchful against all the temptations and deceits of the devil. The enemy, knowin... Read More

EVERY TRIAL MUST BE BORNE FOR THE SAKE OF ETERNAL LIFE

THE VOICE OF CHRIST MY CHILD, do not let the labors which you have taken up for My sake break you, and do not let troubles, from whatever source, cast you down; but in everything let My promise strengthen and console you. I am able to reward you beyond all means and measure. You will not labor here ... Read More 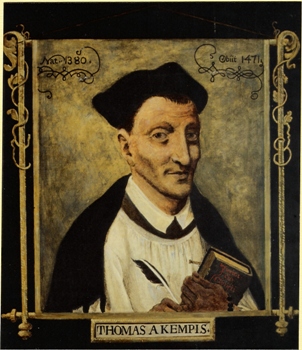 Was a canon regular of the late medieval period and the most probable author of The Imitation of Christ, which is one of the best known Christian books on devotion. His name means "Thomas of Kempen", his hometown, and in German he is known as Thomas von Kempen. He also is known by various spellings of his family name: Thomas Haemerken; Thomas Hammerlein; Thomas Hemerken and Thomas Hämerken.

His first tenure of office as subprior was interrupted by the exile of the community from Agnetenberg (1429). A dispute had arisen in connection with an appointment to the vacant See of Utrecht. Pope Martin V rejected the nomination of Bishop-elect Rudolf van Diepholt, and imposed an interdict. The Canons remained in exile in observance of the interdict until the question was settled (1432). During this time, Thomas was sent to Arnhem to care for his ailing brother. He remained there until his brother died November, 1432. Thomas spent his time between devotional exercises, composition, and copying. He copied the Bible no fewer than four times,[3] one of the copies being preserved at Darmstadt, Germany in five volumes. In its teachings he was widely read and his works abound in Biblical quotations, especially from the New Testament.


Thomas a Kempis was a late Medieval Catholic monk and probable author of The Imitation of Christ, one of the best known Christian books on devotion.

His writings are all of a devotional character and include tracts and meditations, letters, sermons, a life of Saint Lydewigis, a Christian woman who remained steadfast under a great stress of afflictions, and biographies of Groote, Radewijns, and nine of their companions. Works similar in content to the Imitation of Christ, and pervaded by the same spirit, are his prolonged meditation on the life and blessings of the Savior and another on the Incarnation. Both of these works overflow with adoration for Christ. ... Show more
Read More
Subscribe