There is a nervous, unstable segment of the religious world today, ever learning and never able to come to a knowledge of the truth. Like the Athenians of Paul’s time, they are forever seeking some new thing. Every time a new theologian comes out with some novel slant on God or the church or the wor... Read More

Almost twenty centuries after it happened, churchmen are still sitting in panel discussions arguing over whether or not the resurrection really took place. If we have not arrived at head-certainty by now, we had better explore some other avenue. The shortest and surest road to assurance in this matt... Read More

Are We Playing by the Book?

When a group of small boys, out to play ball, arrived at the play ground, they discovered that no one had brought a ball. "Forget the ball," said one impatiently. "Let's get on with the game." We are trying to play without the ball when the Church tries to evangelize before she has repented. The Chu... Read More

By Him All Things Consist

When Paul declared in Ephesians that "Christ filleth all in all" and in Colossians that "Christ is all and in all," he was not merely giving us pious phrases to roll under our tongues; he was stating the fixed and fundamental fact of the Allness of Jesus Christ. Christ was everything to Paul. To the... Read More

Doing Something About It

"They hear thy words but they will not do them." — EZEKIEL 33:31. "But be doers of the Word, and not hearers only, deceiving yourselves." — JAMES 1:22. The prophet Ezekiel ministered in an evil time. It was his lot to prophesy to a generation that listened after a fashion, likened him unto one havin... Read More

"And he said unto them, You are from beneath; I am from above: you are of this world; I am not of this world." — JOHN 8:23. From beginning to end, the Bible teaches that God works down from above, not up from below. This, of course, is contrary to human reasoning. Man teaches that we are on our way ... Read More

"Blessed is he who keeps from stumbling over me" (MATTHEW 11:6). We are familiar with the beatitudes of the Sermon on the Mount. We are also acquainted with other beatitudes of our Lord, such as "Blessed is that servant whom his Lord when he comes shall find so doing"; "Blessed are they that hear th... Read More

Isaac dug again the wells of his father. The Philistines had filled them up and they had to be re-opened. You will observe that Isaac did not have a prayer meeting and ask God to send down an angel with a shovel. Re-opening clogged spiritual wells is our responsibility. Prayer will accomplish many t... Read More

I would like to begin with a personal testimony. My own spiritual experience has gone through three stages. I was converted at the age of ten. The next year I became a preacher and for some years thereafter preached a simple Gospel message. Later I moved into a more liberal position. It was during t... Read More

Many Still Lack the Fire!

It is true that Pentecost, historically, took place once for all. So did Calvary. But each individual must personally appropriate the blood by faith and so must each believer receive by faith the Spirit for power. The promise of the Spirit is received by faith (Gal. 3: 14). It is an experience of sp... Read More

Missing Notes In the Modern Church

It is very fashionable nowadays to ask, "What is wrong with the Church?" It is no new subject. There has always been something or other wrong with the professing church, and there have always been speakers aplenty to discuss it. Unfortunately, their speaking usually relieves only the speaker and not... Read More

I revel in the story of our Lord's appearances during those forty wonderful days after His resurrection. How I would have enjoyed being there! Think of it! You might meet Jesus risen from the dead around any bend of the road! Then I remember that He appeared only to believers. Why didn't He go to He... Read More

There has always been a peculiar charm about sunrise. It has been the theme of many popular songs like "The World Is Waiting For The Sunrise" and that wedding favorite, "At Dawning." Poems aplenty have been written about sunsets, but there is a different beauty that belongs to sunrise. Probably not ... Read More

"Blessed is he who keeps from stumbling over me" (MATTHEW 11:6). We are familiar with the beatitudes of the Sermon on the Mount. We are also acquainted with other beatitudes of our Lord, such as "Blessed is that servant whom his Lord when he comes shall find so doing"; "Blessed are they that hear th... Read More

"What does this mean?" — ACTS 2:12 "This is that..." — ACTS 2:16 "What shall we do?" — ACTS 2:37 It was Sunday morning in the little village where I was vacationing. I attended the local church, the usual morning service typical of most village church services over the land. I sat, a stranger in the... Read More

"For the time has come that judgment must begin at the house of God; and if it first begin with us, what shall the end be of them that obey not the gospel of God? And if the righteous scarcely be saved, where shall the ungodly and the sinner appear?" 1Peter 4:17,18 Peter wrote his letters to Christi... Read More

We Still Have Jesus

"And when they had lifted up their eyes, they saw no one, except Jesus." — MATTHEW 17:8. Peter wanted to build three tabernacles to house his mountain-top experience. That didn't work, but when the glorious experience had passed he still had Jesus. I remember how, years ago, I felt that I needed a d... Read More

What Christ Means To Me

It is a privilege to speak to my friends in the name of Him who has called us His friends if we do the things which He commands us. Someone asked Charles Kingsley, "What is the secret of your beautiful life?" He answered, "I had a friend." And I have often thought that if this life of mine ever appr... Read More

What Doest Thou Here?"

Elijah had come out of a big day on Carmel. He had prayed down fire and water and had become the outstanding man of his generation. It was a red-letter day for the prophet. But the next day after a big day may be a very bad day. From His baptism our Lord moved into His temptation. In the same chapte... Read More

You'll Get Over It!

"I have somewhat against thee, because thou hast left thy first love." — Revelation 2:4. Both in the world of nature and in the world of human nature we have a habit of getting over things. Whether for good or ill, the law of recovery is always at work. Here is a landscape devastated by flood or hur... Read More 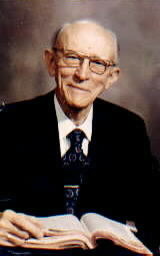 For over 70 years, the church was blessed and challenged by the prophetic ministry of Vance Havner. His style and burden was prophetic similar to the ministry of A.W. Tozer calling the Church to revival. His influence extended to a national level, but Dr. Havner's approach was always to minister where God directed, regardless of the size of the church. His appeal and influence transcended denominational lines, and he spoke to many different groups of people.

Throughout his ministry, Vance Havner lived and preached that a Christian should should exhibit faithfulness to Jesus in all areas of life. He taught that the Christian should attend to, "the outliving of the inliving Christ." Havner wrote, "To some, Christianity is an argument. To many, it is a performance. To a few, it is an experience."


Vance Havner started preaching at 14, and didn't stop 'til he went to glory! Through a preaching and writing ministry that spanned over 70 years, Vance Havner spoke forth the truth of God's Word in a most effectual manner.

In addition to preaching in many of America's most influential churches, Dr. Havner was a highly sought speaker for conferences at places such as Moody Bible Institute in Chicago. He frequently spoke at both state and national meetings of the Southern Baptist Convention. Dr. Havner delivered chapel messages and baccalaureate sermons at colleges such as the Citadel, Columbia Bible College (now Columbia International University), Liberty University, Southeastern Baptist Seminary, and Garner-Webb College.

Though Dr. Havner died in 1986, his influence for Christ continues. His ministry is a testimony to the way in which God can use one surrendered life to touch countless other lives. A preacher once said that: "Old Vance was half Charles Spurgeon and half Billy Sunday with the voice of Will Rogers.

Vance Havner started preaching at 14, and didn't stop 'til he went to glory!

That alone is a great legacy. He was the most homespun of country preachers, possessing a southern charm that always belied his great intellect and persuasive power.

A preacher once said that: "Old Vance was half Charles Spurgeon and half Billy Sunday with the voice of Will Rogers."