The beast I saw resembled a leopard, but had feet like those of a bear and a mouth like that of a lion. The dragon gave the beast his power and his throne and great authority.
Read Full Chapter Copy 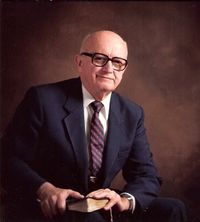 God had just spoken from heaven in clear, articulate tones. Some said that it thundered. They gave a naturalistic explanation for what was divine and miraculous.

That is one attitude we can take toward miracles today. We can try to explain them away as nothing more than natural occurrences.

Or we can say flatly that the age of miracles has passed. We can conveniently relegate them to a dispensational pigeonhole.

A third attitude is to go to the other extreme and claim to experience miracles which, in fact, are nothing but the product of a vivid imagination.

The proper approach is to acknowledge that God can and does perform miracles in our day. As the Sovereign Lord, He can do as He pleases. There is no scriptural reason why He should have abandoned miracles as a means of revealing Himself.

A miracle occurs every time someone is born again. It is a mighty demonstration of divine power, delivering that person from the kingdom of darkness and translating him into the kingdom of the Son of God's love.

There are miracles of healing when medical science has given up and all human hope is gone. Then, in answer to believing prayer, God sometimes chooses to touch the body and restore the person to health.

There are miracles of provision, when the wallet is all but empty. And miracles of guidance, when we stand at the crossroads and don't know which way to go.

There are miracles of preservation when, for example, someone walks away without a scratch from a tangled mass of steel that used to be an automobile.

Yes, God still works miracles, but not necessarily the same ones. He has never chosen to repeat the ten plagues which He sent on Egypt. Though Jesus Christ is the same, yesterday, today and forever, it does not follow that His methods are the same. The fact that He raised the dead when He was on earth does not mean that He raises the dead today.

One final word! Not all miracles are divine. The devil and his agents can perform miracles. In a coming day, the second beast of Revelation 13:1-18 will deceive the earthdwellers by the miracles he will perform. Even today we must test all purported miracles by the Word of God and by the direction in which they lead people.