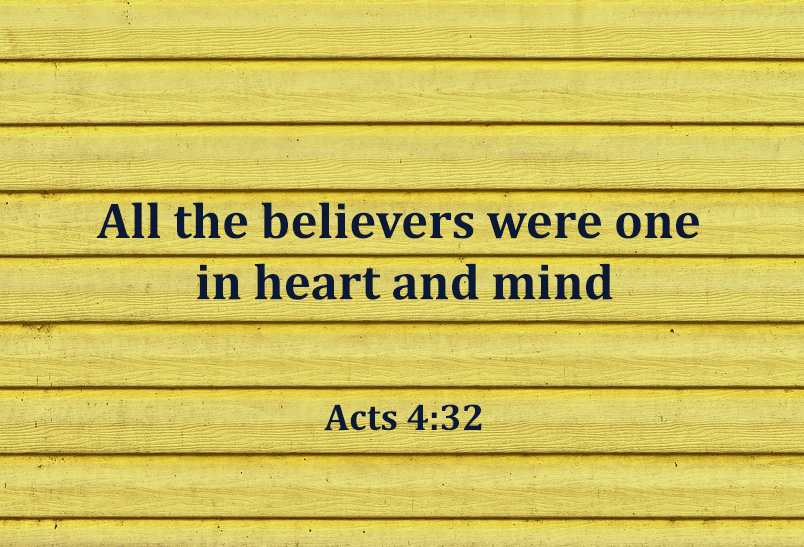 All the believers were one in heart and mind. No one claimed that any of their possessions was their own, but they shared everything they had.&nbsp;With great power the apostles continued to testify&nbsp;to the resurrection&nbsp;of the Lord Jesus. And God&rsquo;s grace&nbsp;was so powerfully at work in them all&nbsp;that there were no needy persons among them. For from time to time those who owned land or houses sold them,&nbsp;brought the money from the sales&nbsp;and put it at the apostles&rsquo; feet,&nbsp;and it was distributed to anyone who had need.

To better understand how the events unfolded, it is helpful to know the background:

After Peter and John performed the miracle of healing the lame man in front of the temple (Acts 3:1-9), a great crowd gathered and caught the attention of the priests. They felt threatened by the apostles&rsquo; power, as they did when Jesus was alive, and thus tried to find a way to stop their ministry. But the crowd, who&nbsp;had seen this lame man begging in his stationary spot day in and day out now skipping and jumping with joy, couldn&rsquo;t deny the obvious miracle. They were in awe of the apostles&rsquo; power and rushed to them. So great was the attention that the religious leaders arrested the apostles, jailed them overnight, and questioned them in the morning. v21&nbsp;After further threats they let them go. They could not decide how to punish them, because all the people&nbsp;were praising God&nbsp;for what had happened.

After the apostles were released, they returned to their meeting place and prayed together with the believers. The Holy Spirit started working powerfully in that place.

Then an amazing thing started happening: Everyone started sharing. No one claimed his possession as his own. This church and community was truly a spiritual family in Christ. Do you divide possessions in family? In family, what&rsquo;s yours is mine and what&rsquo;s mine is yours.

Some were even selling their homes, land and fields, and put it at the apostles&rsquo; feet. This means that they laid down all their possession and entrusted it fully to the authority of the church. They gathered daily, broke bread, shared the Word, prayed, and shared everything. The precious donation by believers was used to distribute to others who were in need.

How beautiful is this? This is the model of the early church.

There are two important characteristics of the early community that we can glean from Acts 4:32-35.

2) So filled was the early church with the joy of salvation through Jesus Christ that this grace surpassed anything they had. This free gift of salvation was enough, and it was the power to overcome temporal, earthly possessions.

The early church experienced the great power of the Holy Spirit working first in their hearts and leading them to take action to share with others in need. Jesus Christ who died and resurrected paved the way for all churches to sincerely follow this path that resembles our Savior.