"GO ON UNTO PERFECTION"

Hebrews 6 Tonight is our last time. I'd like to study Heb. Ch. 6 with you. The whole Bible comprises 1189 chapters, and its truth is comprehended in this chapter for our study. I love most of all to read this chapter. Vs 1 "Therefore leaving the principles of the doctrine of Christ, let us go on unt... Read More

Mark 14 Vs 3 The story begins here with Jesus at Bethany, in the house of Simon the Leper. Being healed of leprosy, Simon made a thanksgiving dinner for Jesus from an overflowing grateful heart. Jesus sat at his table for the first time. While they were at the table there came a woman (John says she... Read More

A CHRISTIAN IN HELL

Luke 16:19-31 “Thou fool, this night thy soul shall be required of thee: then whose shall those things be, which thou hast provided?” (Luke 12:20). This afternoon, let me tell you a story. It is about a Christian in hell! Very strange! A Christian in hell? You think for yourselves: Could Christians ... Read More

Last night I spoke on how Jesus saved the thief. Tonight I shall speak on how Jesus saved a bad woman. Now the Old Testament foreshadows the New Testament. Therefore the O.T. tells of Christ's coming to save sinners. Joshua 2:1. "And Joshua the son of Nun sent out of Shittim two men to spy secretly,... Read More

"What does it profit a man if he gain the whole world but lose his soul?" Those words kept bouncing around inside John Sung's head. The brilliant son of a Chinese Methodist minister, John was in the United States to learn all he could about the sciences. In just five years, even while working to sup... Read More

BAPTISM OF THE HOLY SPIRIT

The Lord gave me a long-term rest and allowed me to go through many trials and suffering. During that period of time I could not help but be downcast. But as I look back now, it was all the grace of God. Thanks be to God. He put me in a cold hospital, a solitary place, where I led a lifeless and lon... Read More

FOUR QUESTIONS BEFORE A CHRISTIAN

Hebrews 10 This chapter can help us solve four important questions on 1) Sin; 2) Preservation; 3) Willful Sinning after salvation; 4) Progress. Vs 1 The law is a shadow of good things to come and not the very thing. So the Jews had to sacrifice lambs every year to atone for their sins. This can neve... Read More

I. HEAVEN AND HELL

II. HOW ZACCHAEUS GOT SAVED

(Luke 10:1-10) Vs. 1 reads, “And Jesus entered Jericho and while passing through....” This was Jesus' last visit to Jericho. What a rare occasion! So the Bible particularly records the action of “His passing through” (Chinese Transi.). How marvellous! Should a merchant pay a visit to Amoy, he would ... Read More

(John Ch. 8) Vs. 1. “And every man went unto his own house. Jesus went unto the mount of Olivers." It is stated here that everybody went home. The crowds went home, indeed, like those returning after a show. The show they saw was Jesus. And what did they bring home with them, each one? Each with “a ... Read More

IV. IN QUEST OF THE TRUE PEACE

(Acts Ch. 8) Vs. 26. Philip held a revival campaign in Samaria and there he did many miracles. He had gone to Samaria following a great persecution in Jerusalem. He preached the Gospel of Jesus and the whole city gathered to hear him. He worked a mighty work in Samaria and brought great glory to God... Read More

IX. THE UNFATHOMABLE GRACE OF GOD

(11 King Ch. 7) Samaria, Capital City of Israel was surrounded by the armies of the Syrians. The people were in grave anxiety, for many had nothing to eat. So much so they were obliged “to eat pigeon dung." Vs. 1. But Elisha said, “By this time tomorrow two gallons of flour or four gallons of barley... Read More

JESUS, MY LORD, I YEARN FOR THEE

Jesus, my Lord, I yearn for Thee, How sweet art Thou to me! O that we're taken up today Fore'er with Thee to stay! Chorus: O Thou the Balsam of the garden, O Thou the sweet Rose of Sharon, Thou art the Lily of the Valley, How shall I part with Thee? In all the world there's not a sound That can Thy ... Read More

The modern Church, much like ancient Israel, has never been very comfortable with God's prophetic people. In every corner of the Church today you can find those who are echoing the words of stubborn King Ahab - "Is that you, (Elijah) you TROUBLER of Israel?" (I Kings 18:17). Usually when something t... Read More

ON BEING FILLED WITH THE HOLY SPIRIT I

ON BEING FILLED WITH THE HOLY SPIRIT II

Acts 9 Vs 1 "And it came to pass, that, while Apollos was at Corinth, Paul having passed through the upper coasts came to Ephesus: and finding certain disciples". Apollos knew the Bible. He led men in repentance and confession of sins. Like many Churches today, which know only daily confession and r... Read More

OUT AND OUT REPENTANCE

Luke Ch. 13 “Open wide the heart-door, Let Jesus come in.” Vs 1-5 Tonight we go one step further into the doctrine of repentance, that we may understand deeper its importance. During Jesus' day there were Galileans who went to Jerusalem to sacrifice. These were killed by Pilate whose blood he mixed ... Read More

Matthew 5 I spoke on Rebirth a few days ago, and went on to holiness and filling of the Holy Spirit. Today let us go a step further --- the pilgrim's daily progress. Let us all advance! How shall we progress on the pilgrim's way to heaven? There are nine steps. We must climb, from station to station... Read More 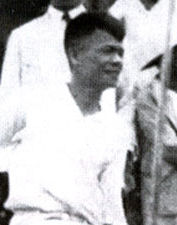 John Sung was born on September 27, 1901 in Hinghwa of the Fukien province in southeast China. He was the son of a respected Methodist minister and was converted as a young boy at the age of nine. In 1920 John Sung at age nineteen left for America to study at Wesleyan University of Ohio. He later went on to study at Ohio State University and Union Theological Seminary. Within five years and two months from the day he entered college, he earned three academic degrees, all while doing menial labor on a full time basis. However, these high honors did not come without taking a great toll on his spiritual life. After a few years in America, sitting under a steady diet of worldly philosophy and liberal theology, John Sung found himself backslidden and doubting everything that his father had taught him.

On February 10, 1927, John Sung recommitted his life to the Lord Jesus Christ. This was just the beginning of a much deeper work. After repenting of his sins, he immediately began to preach to all his classmates and professors. This drastic change in John Sung's behavior made some believe that he had become mentally unbalanced. He soon found himself being committed to an insane asylum by the seminary authorities. He was allowed to take with him only his Bible and a pen. He would later refer to that asylum as his true theological seminary. John Sung was incarcerated for 193 days. During that time he read the Bible from beginning to end forty times. He devoted almost every waking hour to reading the Bible and prayer. Through those months, the Holy Spirit was carefully laying the foundations for John Sung's revival ministry. He was being prepared to participate in one of the mightiest revivals of the twentieth century.