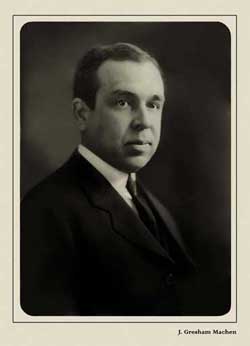 Born in Baltimore, Maryland, he came from a wealthy and well-educated background. He studied at John Hopkins University and then went to Princeton Theological Seminary, receiving an M.A. in philosophy. He studied in Germany and returned to teach New Testament at Princeton. He received his B.D. in 1905 and was ordained in the Presbyterian Church.

The Transforming Effect of the Gospel

Modern thought is a mighty force. It is either subservient to the Gospel or else it is the deadliest enemy of the Gospel. For making it subservient, religious emotion is not enough, intellectual labor is also necessary. And that labor is being neglected. The Church has turned to easier tasks. And no... Read More
J. Gresham Machen

One of the greatest of the problems that have agitated the Church is the problem of the relation between knowledge and piety, between culture and Christianity. This problem has appeared first of all in the presence of two tendencies in the Church--the scientific or academic tendency, and what may be... Read More
J. Gresham Machen

"For the love of Christ constraineth us; because we thus judge, that if one died for all, then were all dead: and that he died for all, that they which live should not henceforth live unto themselves, but unto him which died for them, and rose again." (2 Cor. 5:14-15) In these great verses Paul spea... Read More
J. Gresham Machen

Faith and the Gospel

If what we have said so far be correct, there is now living a Saviour who is worthy of our trust, even Christ Jesus the Lord, and a deadly need of our souls for which we come to Him, namely, the curse of God's law, the terrible guilt of sin. But these things are not all that is needed in order that ... Read More
J. Gresham Machen

Because of the fundamental nature of faith, as it has been set forth, on the basis of the New Testament teaching, in the last chapter, it is natural to find that in the New Testament faith, as the reception of a free gift, is placed in sharpest contrast with any intrusion of human merit; it is natur... Read More
J. Gresham Machen

The Apostle Paul is the greatest teacher of the Christian Church. True, he has not always been fully understood. The legalism that he combatted during his lifetime soon established itself among his converts, and finally celebrated a triumph in the formation of the Catholic Church. The keen edge of h... Read More
J. Gresham Machen

The attack upon the fundamentals of the Christian faith is not a matter merely of theological seminaries and universities. It is being carried on vigorously by Sunday School "lesson-helps," by the pulpit, and by the religious press. The remedy, therefore, is not to be found in the abolition of theol... Read More
J. Gresham Machen

During the classical period, the Greek language was divided into a number of dialects, of which there were three great families--the Doric, the Aeolic, and the Ionic. In the fifth century before Christ, one branch of the Ionic family, the Attic, attained the supremacy, especially as the language of ... Read More
J. Gresham Machen

SENATOR PHIPPS: The committee will be in order. We will hear first from Dr. J. Gresham Machen, of Princeton Theological Seminary. DR. MACHEN: Mr. Chairman and gentlemen of the Committee, there are two reasons why a man may be opposed to a bill which is introduced in Congress. One reason is that he t... Read More
J. Gresham Machen

The Active Obedience of Christ

Last Sunday afternoon, in outlining the Biblical teaching about the work of Christ in satisfying for us the claims of God's law, I said nothing about one very important part of that work. I pointed out that Christ by His death in our stead on the cross paid the just penalty of our sin, but I said no... Read More
J. Gresham Machen

"For as many as are of the works of the law are under a curse; for It Is written, 'Cursed is everyone who does not abide by all the things written in the book of the law to do them.' But that in the law no one is justified with God is clear, because 'the just shall live by faith'; but the law is not... Read More
J. Gresham Machen

The Bible and the Cross

Having observed last week what are the leading views that have been held regarding the cross of Christ, we turn now to the Bible in order to discover which of these views is right. Did Jesus on the cross really take our place, paying the penalty of God's law which justly rested upon us? That is the ... Read More
J. Gresham Machen

The Doctrine of the Atonement

The Fear of God

The Importance of Christian Scholarship in The Defense of The Faith

This Address was originally delivered in London on June 17, 1932. There are, indeed, those who tell us that no defense of the faith is necessary. "The Bible needs no defense," they say; "let us not be forever defending Christianity, but instead let us go forth joyously to propagate Christianity." Bu... Read More
J. Gresham Machen

"And Jesus went about all Galilee, teaching in their synagogues, and preaching the gospel of the kingdom, and healing all manner of sickness and all manner of disease among the people." (Matthew 4:23.) "Lo, I am with you alway, even unto the end of the world." (Matthew 28:20) IN the synagogue at Cap... Read More
J. Gresham Machen

The Minister & His Greek Testament

The Necessity of the Christian School