A Call to Backsliders

"Will the Lord absent himself for ever? And will he be no more entreated? Is his mercy clean gone for ever? And is his promise come utterly to an end for evermore?" Ps. 77:7, 8. 1. Presumption is one grand snare of the devil, in which many of the children of men are taken. They so presume upon the m... Read More

A Caution against Bigotry

"And John answered him, saying, Master, we saw one casting out devils in Thy name: and he followeth not us: and we forbad him, because he followeth not us. But Jesus said, Forbid him not." Mark 9:38, 39. 1. In the preceding verses we read, that after the Twelve had been disputing "which of them shou... Read More

A Miraculous Cure of Breast Cancer

Sat 26 Dec 1761: I made a particular inquiry into the case of Mary Special, a young woman then in Tottenham-Court-Road. She said, "Four years since I found much pain in my breasts, and afterwards hard lumps. Four months ago my left breast broke, and kept running continually. Growing worse and worse,... Read More

A Person after God's Own Heart

“Search me, O God, and know my heart; test me and know my anxious thoughts. See if there is any offensive way in me, and lead me in the way everlasting.” (Psalm 139:23&24) If you have the time, try and read the whole of Psalm139. The Interpreter’s Bible calls it “one of the glories of the Psalter” a... Read More

Wed 30 and Thur 31 Dec 1741: By the unusual overflowing of peace and love to all which I felt, I was inclined to believe some trial was at hand. At three in the afternoon my fever came. But finding it was not violent, I would not break my word, and therefore went at four and committed to the earth t... Read More

"Behold an Israelite indeed, in whom is no guile." John 1:47. 1. Some years ago a very ingenious man, Professor Hutcheson of Glasgow, published two treatises, The Original of our Ideas of Beauty and Virtue. In the latter of these he maintains that the very essence of virtue is, the love of our fello... Read More

Are You Are Thirsty?

As the deer pants for streams of water, so my soul pants for you, O God. My soul thirsts for God, for the living God. Psalm 42:1&2 The Psalmist presented to us in these verses, and in the rest of the Psalm, is a sad and downhearted person. It is unclear why, but he is certainly going through some ki... Read More

The laborer’s appetite works for him, His hunger drives him on. Proverbs 16:26 You may be reading this devotion at the start of your day or you might be reading it before you go to sleep; perhaps you are reading it during your lunch break or perhaps you're working through it at the dinner table with... Read More

Awake, Thou That Sleepest

Preached on Sunday April 4, 1742, before the University of Oxford, by the Rev. Charles Wesley, M.A. Student of Christ-Church. "Awake, thou that sleepest, and arise from the dead, and Christ shall give thee light." Eph. 5:14. In discoursing on these words, I shall, with the help of God, -- First. Des... Read More

Blessed in Order to be a Blessing

Who comforts us in all our troubles, so that we can comfort those in any trouble with the comfort we ourselves have received from God. 2 Corinthians 1:4 In commenting on this verse, Wesley says: “He that has experienced one kind of affliction is able to comfort others in that affliction. He that has... Read More

"Brethren, be not children in understanding: Howbeit in malice be ye children, but in understanding be men." 1 Cor. 14:20. 1. It is the true remark of an eminent man, who had made many observations on human nature, "If reason be against a man, a man will always be against reason." This has been conf... Read More

“And when he was departed thence, he lighted on Jehonadab the son of Rechab coming to meet him, and he saluted him, and said to him, Is thine heart right, as my heart is with thy heart? And Jehonadab answered: It is. If it be, give me thine hand.” 2 Kings 10:15. 1. It is allowed even by those who do... Read More

Causes of the Inefficiency of Christianity

"~Is there no balm in Gilead; is there no physician there? Why then is not the health of the daugh~ter of my people recovered?" Jer. 8:22~~. 1. This question, as here proposed by the Prophet, relates only to a particular people, -- the children of Israel. But I would here consider it in a general se... Read More

“Not as though I had already attained, either were already perfect.” Phil. 3:12. 1. There is scarce any expression in Holy Writ which has given more offence than this. The word perfect is what many cannot bear. The very sound of it is an abomination to them. And whosoever preaches perfection (as the... Read More

Do You Want To?

Whether you turn to the right or to the left, your ears will hear a voice behind you, saying, “This is the way; walk in it.” Isaiah 30:21 Just as when we get married we surrender a certain lifestyle in favour of another, so too when we are born again we are invited to surrender our old lifestyle in ... Read More

The following discourse was written above five-and-fifty years ago, for the use of my pupils at Oxford. I have added very little, but retrenched much; as I then used more words than I do now. But, I thank God, I have not yet seen cause to alter my sentiments in any point which is therein delivered. ... Read More

Sat 26 Dec 1747: I called on one with whose mother I had prayed a little before her death. I knew not till now how she came to desire me, of all persons, to pray with her. It seems her daughter, who was of a lion-like spirit, came to me some time before and told me she had just been a-quarrelling wi... Read More

Think of those who persecute you and try to pray this hymn. In their notes on the following hymn the editors of the Bicentennial Edition of the Works of John Wesley say: “This hymn echoes the riots and persecutions which Charles Wesley faced in Cornwall, Sheffield, Staffordshire, Ireland, etc., with... Read More

To The Reader: Nothing but the strongest conviction, not only that what is here advanced is “the truth as it is in Jesus,” but also that I am indispensably obliged to declare this truth to all the world, could have induced me openly to oppose the sentiments of those whom I esteem for their work’s sa... Read More

On hearing this, Jesus said, “It is not the healthy who need a doctor, but the sick. But go and learn what this means: ‘I desire mercy, not sacrifice.’ For I have not come to call the righteous, but sinners.” Matthew 9:12&13 This is one of two occasions in Matthew’s Gospel where Jesus quotes this ve... Read More 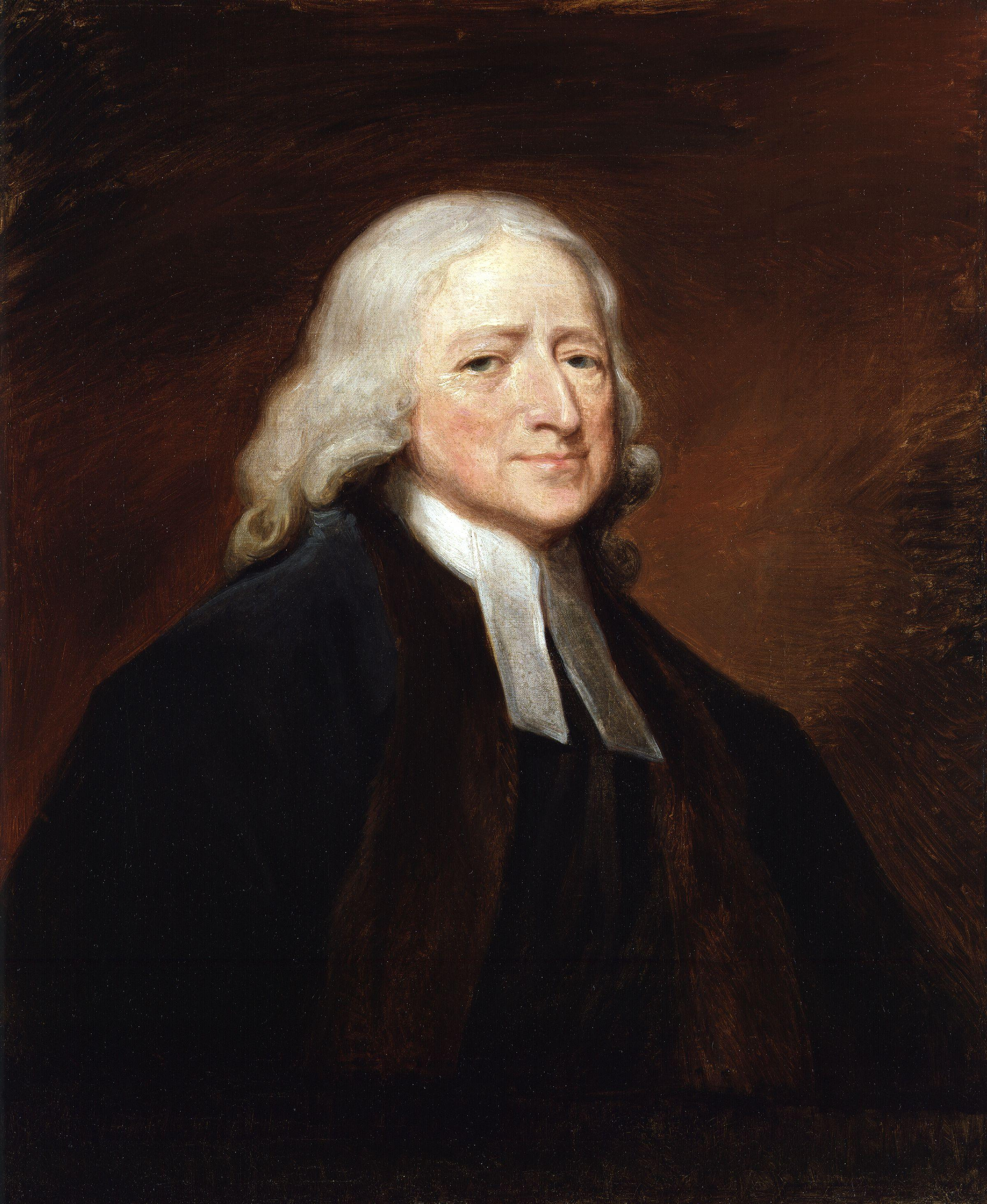 Was an Anglican cleric and Christian theologian. Wesley is largely credited, along with his brother Charles Wesley, as founding the Methodist movement which began when he took to open-air preaching in a similar manner to George Whitefield. In contrast to Whitefield's Calvinism, Wesley embraced the Arminian doctrines that were dominant in the 18th-century Church of England. Methodism in both forms became a highly successful evangelical movement in Britain, which encouraged people to experience Jesus Christ personally.

Wesley helped to organise and form societies of Christians throughout Great Britain, North America and Ireland as small groups that developed intensive, personal accountability, discipleship and religious instruction among members. His great contribution was to appoint itinerant, unordained preachers who travelled widely to evangelise and care for people in the societies. Under Wesley's direction, Methodists became leaders in many social issues of the day, including the prison reform and abolitionism movements.


John Wesley was an Anglican cleric and Christian theologian. Wesley is largely credited, along with his brother Charles Wesley, with founding the Methodist movement which began when he took to open-air preaching in a similar manner to George Whitefield. In contrast to George Whitefield's Calvinism (which later led to the forming of the Calvinistic Methodists), Wesley embraced Arminianism. Methodism in both forms was a highly successful evangelical movement in the United Kingdom, which encouraged people to experience Christ personally.

Wesley believed that this doctrine should be constantly preached, especially among the people called Methodists. In fact, he contended that the purpose of the Methodist movement was to "spread scriptural holiness across England."

John Wesley was the founder of the Methodist movement which grew from the 'Holy Club' of his Oxford friends into a great religious revival. An indefatigable traveller, preacher and writer, Wesley averaged 8,000 miles a year on horseback and gave 15 sermons a week. The reluctance of the Anglican clergy to lend him their pulpits led him to give some of his sermons in the open air, a decision which enabled him to reach those among the poorer sections of society who were not accustomed to going to church.